Senvion, one of the world’s biggest wind turbine manufacturers, acquired RodPack technology from Chase Corporation in November 2015. The material is already used in the blade for the Senvion 6.2M152 and is anticipated to be integrated in future blade designs for both onshore and offshore turbines. RodPack, which substitutes the standard glass fabrics used in the main girder, enables optimized blade design as well as faster and higher-quality blade production. The technology will be exclusively available and used in Senvion turbines. 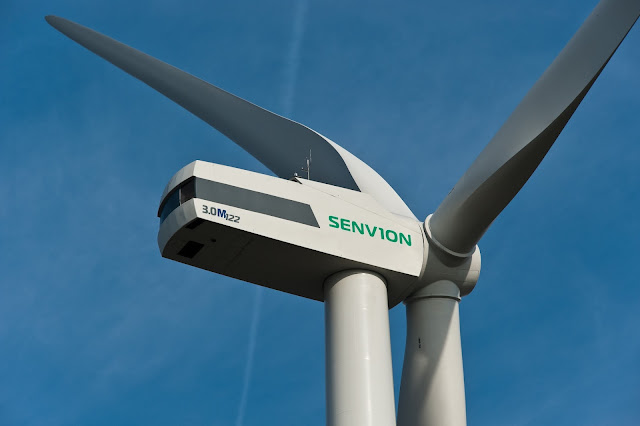 RodPack technology is based on cured pultruded rods placed on a non-woven fabric. Senvion is currently working on the co-development of a machine to expand RodPack production capacity. Andreas Nauen, CEO at Senvion, says: “The steady improvement of our turbines and their efficiency is key for us. It is our aspiration to use the best and highest-quality materials and products on the market. The acquisition of RodPack is a logical step for us to reach that goal.” RodPack has 9% better material properties than high-modulus glass and 20% better than standard unidirectional glass. This creates the potential for blade designs with higher yields, longer life or a higher wind class.

Bernhard Telgmann, Executive Vice President Product & Technology at Senvion, states: “Earlier this year, we announced that together with our new owner we would be able to strengthen the investment in our product development. Since then, we have presented a new turbine with the longest onshore blades currently available and are now going a big step forward in the efficiency improvement of blades by acquiring RodPack. Senvion is a technology leader, and we will keep going ahead with our pioneering spirit.”

In September this year, the company presented its low-wind turbine, the Senvion 3.4M140 with a blade length of 68.5 meters and opened an additional Research and Development Center in Bengaluru (Bangalore), India, to support the TechCenter in Osterrönfeld. Senvion was acquired by Centerbridge Partners in April and since then the new owners have announced a clear agenda and support for further investment into innovations at Senvion.

Senvion wind turbine with Next Electrical System on the grid

Senvion has supplied the first kilowatt hours (kWh) with its first Senvion 3.4M114 NES (Next Electrical System), which is installed in the German region of North Friesland. This is the company’s response to the increased grid requirements that will apply in the future for the high-voltage grid in Germany due to implementation of TAB Hochspannung (technical conditions for the connection and operation of customer systems to the high-voltage grid) from 2017 onwards. Long-term implementation of the EU specifications is expected in other European countries, as well as in Germany, with connection to the medium-voltage grid. Andreas Nauen, CEO at Senvion, says: “Wind energy already makes a considerable contribution to the German electricity mix. This is accompanied by the responsibility of having a grid-stabilizing effect in the future as well. Our customers already attach considerable importance to meeting tomorrow’s power grid requirements at an early stage – and we offer them sustainable technologies to achieve this.” The Senvion 3.4M114 NES builds on the tried-and-tested design approach of over 600 Senvion 3.XM DFIG (Doubly Fed Induction Generator) turbines that have already been installed worldwide. In addition, the newly integrated fully rated converter improves the electrical capabilities thanks to a larger frequency and voltage range as well as an optimized idle power range. Furthermore, the new electrical system of the Senvion 3.4M114 NES allows the rotor to be operated optimally in the partial load range and thus to work more profitably in the sound-optimized range. It is thus following a core focal point currently adopted by Senvion. “We are aware of the demand for turbines that are as quiet as possible. For this reason, we focus more strongly on this in all the optimizations we make,” says Hendrik Böschen, Managing Director at Senvion Deutschland GmbH. “We are also working on optimizations to the blades.” In September 2015, the company had announced the Senvion 3.4M140 turbine, which, with its Eco Blade Control system, will have serrations on the rear edges of the blades in order to reduce noise. A further three turbines with a new electrical system will enter operation this very year.