The award was bestowed jointly to EDF EN Canada and Enbridge Inc. as co-owners of the 300 megawatt (MW) Blackspring Ridge Wind Project located in Alberta. 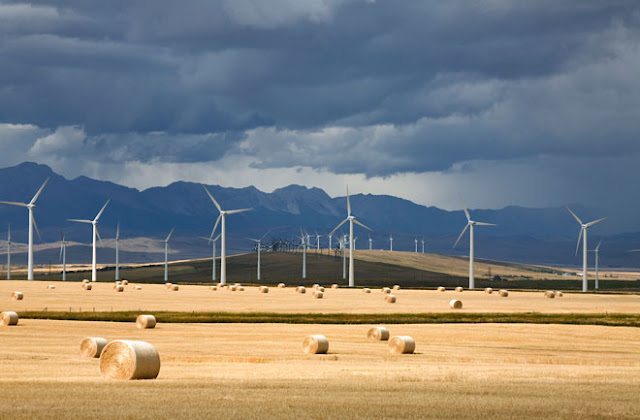 “The CanWEA Awards recognize and honour individuals, organizations and projects that have made significant contributions to advance the Canadian wind energy industry,” said Robert Hornung, CanWEA President. “The Wind Energy Project Award is presented to a commissioned Canadian wind energy project that has demonstrated an exceptional commitment to responsible and sustainable development.”

The Blackspring Ridge Project, located in Vulcan County near the town of Carmangay, Alberta, started construction in May 2013 and reached commercial operation in just 362 days on May 12, 2014. The Project is comprised of 166 Vestas V100-1.8 MW wind turbines. With an investment of about CAD $0.6 billion, the project represents the largest investment in wind energy in Western Canada.

“Our community is very proud to be a part of such an important renewable energy project,” commented Kym Nichols, Mayor of Carmangay. “There are tremendous economic benefits to our community including the more than 350 jobs that were created during construction and another 20 permanent operations and maintenance jobs.”

The Alberta-based Climate Change and Emissions Management Corporation committed CAD $10 million in support of the project. The CCEMC provides funding for projects that will reduce greenhouse gas emissions and help Alberta adapt to climate change.

EDF EN Canada commissioned its first wind project, Saint-Robert-Bellarmin (80 MW), in October 2012, followed by Massif du Sud (150 MW), and Lac-Alfred (300 MW). The three projects are jointly owned by EDF EN Canada and Enbridge Inc. By the end of 2015, EDF EN Canada will have placed into service 1,374 MW of wind and solar in Canada which created employment opportunities for over 1,000 people in the development and construction phase.

Enbridge has invested approximately CAD $4 billion in renewable energy assets over the past five years, resulting in a portfolio of more than 1,600 MW of combined net generating capacity of green power projects.

EDF EN Canada, a subsidiary of EDF Energies Nouvelles, is a market leader in renewable energy, with more than 1,300 MW of wind and solar power facilities in service or under construction. Headquartered in Toronto and Montreal, EDF EN Canada employs an integrated approach to project development covering all aspects from conception to commissioning through to generation and long term operations. The subsidiary offers financial strength, technological innovation and an emphasis on service. EDF EN Canada draws on the market expertise of EDF Renewable Energy, EDF Energies Nouvelles’ U.S. subsidiary. EDF Energies Nouvelles is 100% owned by the EDF Group.
Enbridge Inc., a Canadian company, exists to fuel people’s quality of life, and has done so for more than 65 years. A North American leader in delivering energy, Enbridge has been ranked on the Global 100 Most Sustainable Corporations index for the past seven years. Enbridge operates the world’s longest crude oil and liquids transportation system across Canada and the U.S., and has a significant and growing involvement in natural gas gathering, transmission and midstream business, as well as an increasing involvement in power transmission. Enbridge owns and operates Canada’s largest natural gas distribution company, serving residential, commercial, and industrial customers in Ontario, Quebec, New Brunswick and New York State. Enbridge has interests in more than 1,600 megawatts of net renewable and alternative generating capacity, and continues to expand into wind, solar and geothermal power. Enbridge employs more than 11,000 people, primarily in Canada and the U.S., and is ranked as one of Canada’s Top Employers for 2015. Enbridge’s common shares trade on the Toronto and New York stock exchanges under the symbol ENB.