In a fitting move for “Husum Wind”, the wind industry exhibition taking place on 15 – 18 September 2015, which is focusing solely on the core German market for the first time, Nordex SE will be presenting the light-wind N131/3300 turbine, which it has developed specifically for the German market. 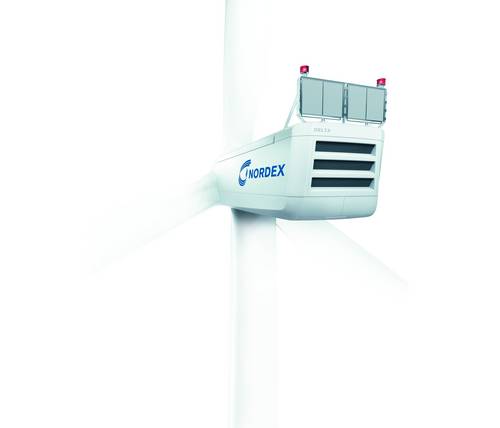 The N131/3300 is a new version of the N131/3000 from the Generation Delta range. With a rotor diameter of 131 metres and nominal output ten percent higher than that of the N131/3000, it can boost yields by between four and six percent depending on the location. With the N131/3300, Nordex is thus completing the next systematic step towards its own goal of additionally reducing the cost of energy achieved by its turbines. At the same time, it is an appropriate recipe for further growth in Germany.

The N131/3300 has a guaranteed noise emission level of a low 104.5 dB(A) – even in yield-optimised operations without the use of any acoustic assistance. The light-wind N131/3000 turbine, which has an identical design to the N131/3300, is currently undergoing field testing. Preliminary results of sound emission testing confirm the forecast figures: at 103.1 dB (A), the turbine even remains below the guaranteed maximum level of 104.5 dB (A). These results also apply to the N131/3300, thus making it attractive for locations for which the approval procedure entails heightened sound level requirements.

Series production of the N131/3300 with a hub height of 134 metres will be commencing from mid-2016, with the taller version to go into production towards the end of the year. This means that the N131/3300 can already be included in applications for permits for 2016.

With its platform structure and identical guaranteed sound level, the conversion of existing applications from the N131/3000 to the N131/3300 will be particularly straightforward. The advantage for customers is that the tendering process will be governed by EEG 3.0 (New German Renewable Energy Sources Act) from 2017. All turbines which are approved under the German Federal Emission Protection Act before the end of 2016 must be assembled by the end of 2018 and will then be subject to the feed-in tariffs provided for in the 2014 Renewable Energies Act.

Internationally, the N131/3000 currently remains the right turbine for light-wind regions as most international locations make greater demands due to the wind and climatic conditions.