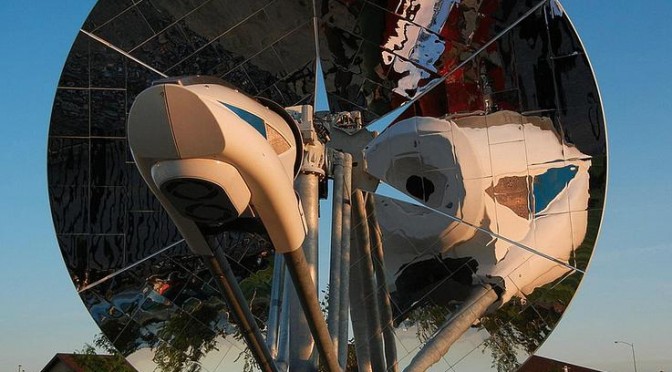 A new Investment Tax Credit proposal linked to installation costs would raise CSP tax breaks from the end of 2016, the point at which the 30% credit for all solar projects is currently scheduled to drop to 10%.

The new ITC proposal has been presented by Amit Ronen, who strategized the 8-year extension of the ITC in 2008 when he was Deputy Chief of Staff to Senator Maria Cantwell.

Ronen now advises Congress on renewable policy as director of the George Washington University Solar Institute, and he is concerned that short term extensions sought by the solar industry are unlikely to pass the legislative process.

In “Softer Solar Landings: Options to Avoid the Investment Tax Credit Cliff” Ronen and co-author James Mueller instead propose a technology neutral ITC that would provide a tax credit based on initial installation costs that automatically declines as deployment costs decline with scale and maturity.

Under the proposal, CSP projects would receive a higher ITC rate than PV projects, for example, since only a handful of CSP projects have been developed and they have not gained from such economies of scale.

The table below shows the ITC rate for CSP would be well over 30% based on current costs, while the rate for PV would fall below 30%.

As the cost of installing CSP falls over time, its ITC rate would be reduced accordingly.
The proposal is seen as technology neutral, because it doesn’t determine the costs by technology type.
Instead, the overnight installation cost of the technology, as filed by the project to the internal revenue service, is used to determine each ITC rate.

“Any new energy generating technology confronts the chicken and egg challenge of needing to reach scale to be price competitive, but until they reach scale they are usually too expensive for the market,” Ronen told CSP Today.

“As more CSP is developed, it will likely come down in cost and learning-by-doing, as it scales. Even in just the first tower projects – we saw in the three systems comprising Ivanpah – each subsequent tower was constructed faster and at a lower delivered cost than the previous one.”
“This proposal takes into account varying cost structures between different solar technologies,” policy research associate Scott Clausen at the American Council on Renewable Energy (ACORE) added.

The below table from EIA shows global net generation from renewable sources.

The 30% ITC helped solar installation grow by over 1,600% since its initial two year trial in 2006; in particular after 2008 once the credit was locked in for eight years, giving investors and developers the certainty needed to invest in new technologies.

With CSP’s longer permitting and construction time of up to five years; the post-2008 ITC growth spurt in CSP does not show up on the above chart until 2014.

No new CSP projects began development after 2013, as the 2016 expiration date for the ITC terms deterred investor interest in projects which take up to five years to first permit and construct.

The combination of certainty and the market maturity response measures in Ronen’s proposal resembles the California Solar Initiative (CSI).

“There are a lot of similarities to what was done in California,” said Joe Desmond, BrightSource SVP of Government Affairs.

Desmond was formerly Chairman of the Energy Commission under Governor Schwarzenegger and was instrumental in designing elements of CSI and helping it move through the state legislature.

“The rationale as we saw it at the time was balancing certainty against the incentives and wanting to send the right signals to the private sector, coupled with administrative simplicity and ease of understanding,” Desmond explained.

Clausen believes comprehensive tax reform is likely in 2017, after the Presidential election in November 2016.

De facto two-year ITC extension using “commence construction” language will be offered again on the Senate floor in the Fall of 2015, having failed in committee and in 2014, but these short term extensions present a barrier to CSP development, Clausen said.

“With comparatively lengthy permitting and construction times, a one or two-year extension of the ITC would probably not help that many CSP projects,” he said. “Investors need long-term certainty for such multimillion dollar investment.”

The first 250 MW of a revised 500 MW Palen project was conditionally permitted in 2014, but BrightSource and Abengoa withdrew their application for lack of an ITC extension post-2016.

“We’ve had productive conversations up on the Hill,” said Ronen, who served in the Senate for 11 years.
“There is support for tech neutral energy incentives if they sunset automatically and have the long term predictability the market needs to get every innovative energy technology over the valley of death to commercialization.”

By assessing projects on a case-by-case basis, Ronen’s proposed ITC replacement means that projects can still continue to receive tax credits even if the renewable technology becomes much more competitive.

“In addition, those who are concerned about over-subsidizing certain technologies or ”picking winners and losers” prefer a technology-neutral solution,” Ronen explained.

“While tax reform is a few years off, something significant like this concept takes time for people to fully understand the options and get the structure right before it starts moving. Our role is to put ideas out there and get thoughtful conversations started and acted on.”