The $2 million DOE grant had three components – studying wind, solar and energy efficiency – with the turbines providing the wind element. But the purpose is academic rather than energy generation. 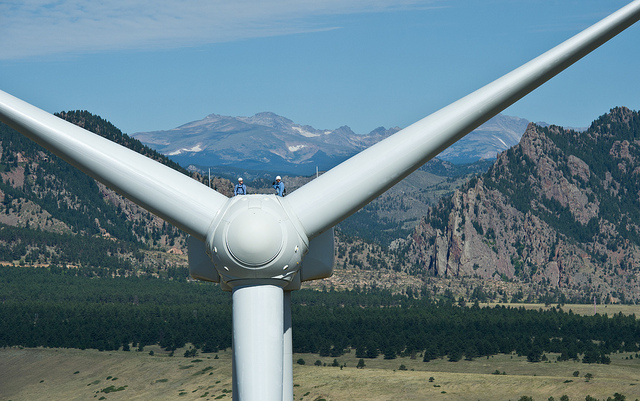 Engineering-technology students will help collect and study data collected from the turbines.

Twin turbines have been installed behind Melnick Hall with a third expected toward the end of the year.

The blades can be adjusted to determine the wind changes it produces, Marie said.

A third turbine, expected to be installed later this year, will have a shroud around one of the blades to gauge its effects.

The project was delayed because the area is in an historic district.

The Wick Avenue neighborhood earned historic district designation on the National Register of Historic Places in the mid-1970s.

Any time federal or state money is used for a project within a historic district, a review by the Ohio Historic Preservation Office must be completed.

“Because there were adverse effects, they continued to consult with us about who to take that into account and to look into alternatives to avoid adverse effects,” he said.

Epstein said the turbines detract from the view and setting because of their height, creating the adverse effect.

Because the university and the energy department concluded there wasn’t an alternative to the installation plan, the entities agreed to a list of mitigation actions, he said.

Students in a history practicum will create exhibits on the history of the district and a professionally-prepared hardcover book will be created that documents the buildings in the historic district.

Under the agreement, the wind turbines will be in place for five years.