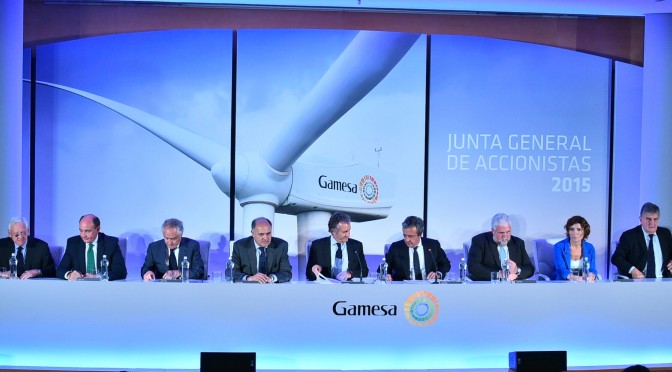 Gamesa obtained €97 million in net profit in the first half of 2015, more than double the figure in the same period of 2014, as a result of expanding commercial activity (+30.8%) and improved profitability.

These results for the first half are aligned with the goals of profitable growth and a sound balance sheet set out by the Business Plan 2015-2017, which was unveiled in June.

This growth is attributable to the company’s sound diversified position: India and Latin America accounted for 45% of total MWe sales, while developed markets such as Europe and the US raised their contribution to 38%. China contributed 17%.

Operation and maintenance services revenues increased by 5.6% to €223 million in the first half.

Profitability and the balance sheet are improving steadily

In a situation of rising demand, Gamesa continues to enhance profitability and the balance sheet. It reported €136 million in underlying EBIT1 in the first half of 2015 (+64%), equivalent to 8.2% of group revenues.

Net profit more than doubled in the first half of 2015, to €97 million, driven by sales growth, optimisation of variable costs, a positive currency effect and the recognition of Adwen. But for the contribution from the offshore subsidiary, net profit would have been €86 million. The company continues to strengthen its balance sheet and ended the half-year with zero financial debt: a net cash position of €39 million.