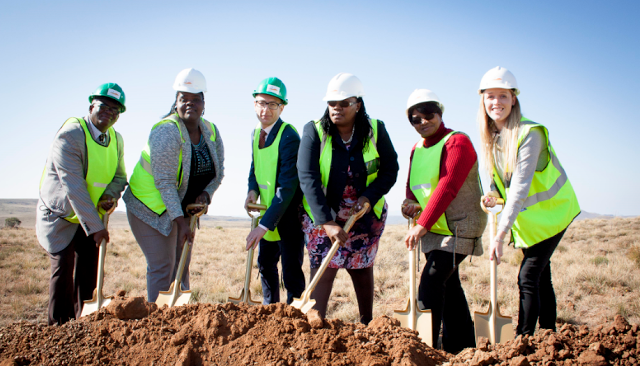 A ground-breaking ceremony on the site of the 80MW Noupoort Wind Farm was attended by representatives from the community of the surrounding Umsobomvu Local Municipality, including Ward Counsellors and the Mayor. This Northern Cape project is one of the first to start construction as part of the third round of the Renewable Energy Procurement Programme and is expected to start commercial operation by mid-2016. 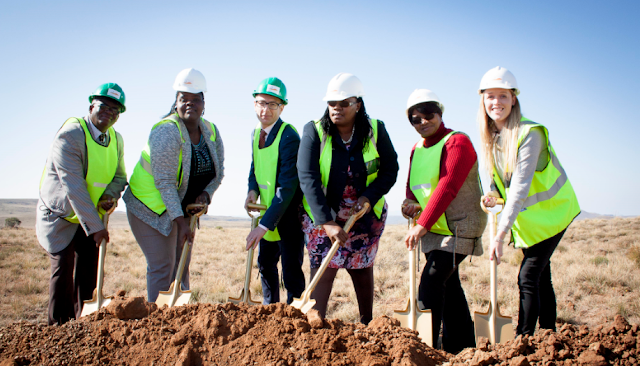 From left to right: Councillor Mzimkhulu Sesthile- Ward 1; Livhu Sikhipha – Economic Development Manager of Noupoort Wind Farm; Tom Thorogood – General Manager of Noupoort Wind Farm; Honorable Mayor Nombulelo Hermas- Umsobomvu Municipality, Councillor Annie Fritz -Ward 2, Martina Flanagan – Project Manager of Noupoort Wind Farm.
Mainstream has been awarded a total of 848 megawatts of wind and solar projects under this programme since the first award in 2011. Last year the company delivered three wind and solar facilities into commercial operation under the first round of the programme. Mainstream is currently constructing three wind farms in South Africa’s Northern Cape, totalling 360MW, of which Noupoort is one. In June of this year Mainstream was awarded preferred bidder status for an additional two wind farms in the country’s Northern and Western Capes.
Project Manager of Noupoort Wind Farm, Martina Flanagan, who previously worked on the construction one of the Jeffreys Bay wind farm, says, “In previous years, commercial activity in Noupoort was heavily dependent on railway activity. After demand on the rail network dwindled, the town suffered from a significant decline in local business leading to increasingly difficult socio-economic conditions for the local population.” She continues, “As the Noupoort Wind Farm is being built on an undeveloped site surrounding a small rural community, it will help boost the local economy and have a positive impact on the community. Already many people are being employed, with 162 locals working on the roads, electrical works and foundations for the wind turbines, a number of foundations have been cast to date. Employment of local labour will continue throughout the construction period.”
The wind farm is expected to generate approximately 305 000 megawatts hours of clean, renewable energy to the national grid each year.  When operating at full capacity, it is expected to supply enough green electricity to power approximately 70 000 average South African homes and avoid roughly 300,000 tonnes of carbon emissions each year when compared to traditional fossil fuel power plants.
The turbines will be supplied by world-leading manufacturer Siemens Wind Power, with the 99m turbine towers to be the first manufactured at the new Gestamp Wind Turbine Tower Factory in Atlantis, Western Cape. The blades, hubs and nacelles that compose the wind turbines, will arrive via the N10 from the Port of Ngqura, in Coega, while the towers will be routed along the N1 from Atlantis. Delivery of the turbines is due to commence in October this year.
Civil and electrical works are to be completed by a consortium comprised of Murray and Roberts Construction and Consolidated Power Projects.
“Projects, like the Noupoort Wind Farm, that harness wind power – a sustainable free renewable energy source – are beneficial not only to the environment but to the surrounding communities, economy and country as a whole,” concludes Flanagan.
Noupoort Wind Farm is owned by a consortium dedicated to providing clean, renewable energy to the people of South Africa.  This consortium is led by Lekela Power, a joint venture between Actis, and Mainstream Renewable Power. Other members include Thebe Investment Corporation; The IDEAS Managed Fund; Futuregrowth Asset Management; Genesis Eco-Energy in partnership with Lereko Metier Sustainable Capital; and the Noupoort Renewable Energy Trust, which was established with the objective of carrying out public benefit activities to assist the local community through economic development.
In addition to the Noupoort Wind Farm, Mainstream is currently constructing another two wind farms in the Northern Cape, totalling 360MW and representing an investment of approximately ZAR 9 billion.The Noupoort Wind farm is owned by a consortium dedicated to providing clean, renewable energy to the people of South Africa: