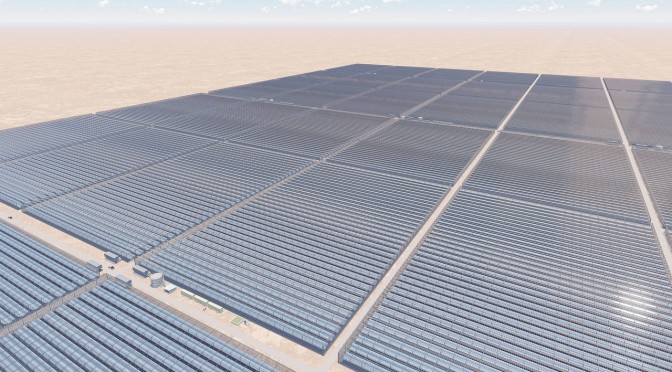 One gigawatt solar thermal project for oil production establishes oil industry as the next major market for solar energy. Petroleum Development Oman (PDO), the largest producer of oil and gas in Oman, and GlassPoint Solar, the leader in solar enhanced oil recovery (EOR), today announced plans to build one of the world’s largest solar plants. Miraah (meaning mirror in Arabic) will be a 1,021 megawatt solar thermal facility in South Oman, harnessing the sun’s rays to produce steam. The steam will be used in thermal EOR to extract heavy and viscous oil at the Amal oilfield. Miraah will deliver the largest peak energy output of any solar plant in the world. The scope of this landmark project underscores the massive market for deploying solar in the oil and gas industry.

The plant will provide a sustainable solution for EOR steam, which is currently produced by burning natural gas. Once complete, Miraah will save 5.6 trillion British Thermal Units (BTUs) of natural gas each year, the amount of gas that could be used to provide residential electricity to 209,000 people in Oman.

At the contract signing ceremony in Muscat, Raoul Restucci, Managing Director of PDO, said: “PDO is proud to lead the industry by deploying solar-powered oil production at an unprecedented scale and level of efficiency. The project will provide a significant portion of the steam demand at Amal and is an important part of PDO’s production plans.

“The use of solar for oil recovery is a long-term strategic solution to develop PDO’s viscous oil portfolio and reduce consumption of valuable natural gas, which is needed elsewhere to diversify Oman’s economy and create economic growth. It also will displace diesel and higher carbon intensive power generation and oil burning in future thermal projects.

“PDO has been a pioneering force in EOR for a number of years and it will play an increasingly important part in the Company’s portfolio, accounting for around a third of our production by 2023.”

PDO has been working with GlassPoint since 2010 on a successful pilot scheme at Amal to test the commercial viability of solar steam which produced 50 tons of steam a day. The seven megawatt solar steam pilot will continue to operate at Amal alongside the full-scale development.

Restucci added: “PDO awarded GlassPoint the contract based on the strength of our successful solar steam pilot, which has exceeded expectations for reliable operations and steam delivery for the past two years. GlassPoint’s proven track record propelled us toward this historic project that will be over 100 times larger.”

The project will generate an average of 6,000 tons of solar steam daily for oil production, dwarfing all other solar EOR installations. The system will deliver steam to Amal’s existing thermal EOR operations, meeting a sizable portion of the field’s steam demand. The full-scale project will comprise 36 glasshouse modules, built and commissioned in succession in groups of four. The total project area, including all supporting infrastructure, will span three-square kilometres, an area equivalent to more than 360 football pitches. The actual solar field will span less than two-square kilometres.

The project will break ground this year with steam generation from the first glasshouse module in 2017. Once complete, Miraah will deliver more energy to the customer than any other solar plant in the world. The project is expected to reduce CO2 emissions by over 300,000 tons annually, the equivalent of taking 63,000 cars off the road.2

Rod MacGregor, President and CEO of GlassPoint Solar, said: “The oil and gas industry is the next major market for solar energy. It takes a tremendous amount of energy to produce heavy and viscous oil, with a typical oil field consuming the same amount of energy as a small city. PDO is the global leader in oil and gas innovation and the first to realise the value of using solar to replace traditional fuel sources to generate steam for EOR.”

MacGregor added: “GlassPoint is thrilled to embark on a new era of partnership between the oil and solar industries. Our efforts with PDO will pave the way for additional large-scale solar EOR developments at oilfields around the world.” 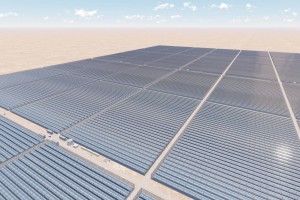 Much of the world’s easy oil has already been recovered. To maintain production, oil companies are increasingly moving from primary and secondary methods to tertiary oil recovery processes as well as unconventional resources, which are more complex and expensive to produce. Recovering heavy oil, which represents the major proportion of the world’s remaining reserves, is energy intensive. Typically, for every five barrels of heavy oil, the energy equivalent to one barrel is consumed in the production process.

The leading method of producing heavy oil is steam flooding, a thermal EOR process that injects steam into a reservoir to heat the oil and reduce viscosity, making it easier to extract and pump to the surface. Steam for thermal EOR is typically produced by burning large volumes of natural gas. Gas demand will continue to rise alongside EOR projects.

GlassPoint designed a concentrating solar power (CSP) technology to meet the specific needs of the oil and gas industry. Unlike solar panels that generate electricity, its enclosed trough technology uses large, curved mirrors to focus sunlight on a boiler tube containing water. The concentrated energy boils the water to produce high-quality steam, which is fed to the oilfield’s existing steam distribution network.

A self-cleaning glasshouse encloses and protects the solar collectors from wind, sand and dust storms common in Oman and throughout the Gulf region. The glasshouse structure creates a wind-free environment so the mirrors and other components inside can be very thin and lightweight. The enclosed trough mirrors are a small fraction of the weight of exposed solar thermal systems, resulting in significant material and cost savings.

PDO’s multi award-winning Nimr reed beds project is also considered to be the largest industrial constructed wetland system in the world, and uses the power of nature – huge reed ponds – to treat more than 700,000 barrels of produced water from oil production a day at a fraction of the cost and energy intensity of conventional deep water disposal. The project yields an energy and fuel gas reduction, not least related emissions, of 98% and provides the opportunity for turning the waste water into value.

Restucci said: “Integration of this solar EOR technology into existing PDO oilfield operations will be seamless and further extend our energy conservation efforts, building on globally recognised water treatment and other initiatives across our portfolio.

“This project has the potential to make Oman a world centre of excellence for solar EOR with obvious benefits in terms of job and training opportunities for Omanis, building a robust Omani supply chain and attracting further foreign investment, whilst building a reliable and sustainable proposition for solar EOR worldwide.

“What we are aiming to do is secure greater recovery of oil while at the same time reducing our energy consumption and our costs. We are confident this is going to be a win-win and sustainable project for PDO, GlassPoint and the Sultanate.”

GlassPoint is the leading provider of solar steam generators to the oil and gas industry for applications such as Enhanced Oil Recovery (EOR). Oil operators worldwide deploy EOR to boost well productivity by up to 300%. By replacing gas-fired steam generation with solar, GlassPoint can reduce EOR gas consumption by up to 80%. The gas saved can be redirected to higher value uses such as LNG export, industrial development and power generation. GlassPoint’s projects operate in global markets ranging from the Middle East to California. For more information, visit GlassPoint.com.

In September 2014, the State General Reserve Fund (SGRF), Oman’s largest sovereign wealth fund administered by the Ministry of Finance, co-led a US$53 million investment in GlassPoint with Royal Dutch Shell and other investors to accelerate the deployment of solar EOR in Oman throughout the region.