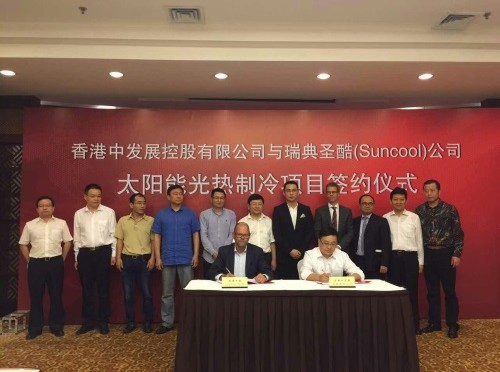 Zhong Fa Zhan Holdings Limited (“Zhong Fa Zhan” / “ZFZ” or “the Group”; Stock Code:475) announced that on 1 July 2015, ZFZ and each of the Subscribers entered into the Subscription Agreements pursuant to which the Company has agreed to (i) allot and issue to Suncool AB (a Sweden Company under ClimateWell) 6,000,000 new Shares, at the subscription price of HK$2.10 per Share, and grant the Warrants to Suncool AB to subscribe for an aggregate of 24,000,000 Warrant Shares (subject to adjustment) at the Exercise Price, being HK$2.50 per Warrant Share; (ii) allot and issue the Investor Subscription Shares, being 36,000,000 new Shares in aggregate, at the subscription price of HK$2.10 per Share, to six investors. 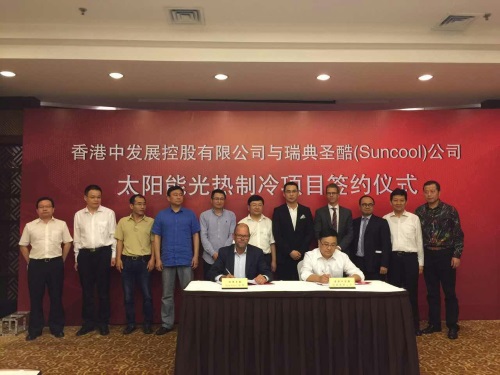 On the same date, Suncool AB, and Nation Power Group Limited (“Nation Power”), a wholly-owned subsidiary of ZFZ, entered into the Licence Agreement in relation to the grant of exclusive right and licence to Nation Power, to exploit the proprietary triple-state absorption technology of Suncool AB’s CoolStore concept for solar heating and cooling collectors within the solar thermal powered indoor climate solutions for buildings and CoolStore Territory (Greater China) for a term of 15 years.

In order to develop the Solar Business in the PRC, on 1 July 2015, the Group also entered into the Consultancy Agreement with China-UK Low Carbon Enterprise (Jiangyin) Investment Management Ltd (“CULCE (Jiangyin)”), a Company under China Energy Conservation and Environmental Protection Group, in relation to the consultancy services to be provided by CULCE (Jiangyin).

Mr. Wu Hao, Chairman of Zhong Fa Zhan, said, “The deal marks the first step in ZFZ’s development into a new era of renewable energy and energy efficiency. We are also delighted to have the opportunity to cooperate with Suncool AB, a Company under ClimateWell. Industrifonden, a Swedish governmental venture capital fund and leading investor in green technology, is the single largest shareholder in ClimateWell. Another major shareholder of ClimateWell, Skirner, is a Swedish family business mainly engaged in property development. In the view of the increasing global demand for renewable energy, we are of the view that the Solar Business in the PRC offers attractive potential growth and return.”

CoolStore cooling-stored pipe is a photovoltaic solar-assisted photo-thermal pump component designed by Suncool AB with unique patented pipes’ internal structure, specially processed through reversible chemical reaction of salt solution as well as realising cooling and heating function, which is an epoch-making product. The CoolStore cooling-stored pipe integrates cooling function, as a part of solar collectors, realising heating, cooling and energy storage. It directly integrates into the solar collector, which greatly reduces the need for external devices, installation effort and large-scale installation could be finished quickly. It does not require any refrigerant which will produce greenhouse gas and thus is more environmental-friendly.

Mr. Hubert Chan, CEO of Zhong Fa Zhan, said, “Entering into the agreements represents a good opportunity to enable the Company to develop a new business segment relating to solar technology industry in the PRC and improve the financial position and liquidity of the Group. In addition, we will receive strategic and operational advisory support from the leader of green energy in China, the China Energy Conservation and Environmental Protection Group through its multi-national vehicle China-UK Low Carbon Enterprise, we believe we are well in place to capture the enormous market opportunities in the solar technology industry in the PRC.”

Zhong Fa Zhan Holdings Ltd is a company listed on the main board of Hong Kong stock exchange since 2007. It is currently devoted in developing its business in the environmental protection and energy saving field. Engaging in this Solar Air Conditioning business signifies that ZFZ has taken a crucial step in tapping its green energy business development plan.

Each of ClimateWell and Suncool AB is a company incorporated under the laws of Sweden. ClimateWell’s technology is currently applied in the fields of solar-powered heating and cooling in buildings, heat-driven air conditioning in heavy-duty vehicles and gas-fired water heaters for residential. ClimateWell’s components are integrated in those applications by major OEM customers like GE, Rheem and Caterpillar.

The Suncool AB’s Technology, which was originally developed by ClimateWell, an award-winning and leading provider of sorption components, is based on salt crystals, which can store chemical energy and convert it to heating and cooling without using any electricity or moving parts. The Licensed Technology enables the world’s first solar thermal collector with integrated cooling and was launched and successfully demonstrated in a first large-scale installation in Europe. www.climatewell.com/suncool.

Industrifonden, a Swedish governmental venture capital fund and leading investor in green technology, is the single largest shareholder in ClimateWell. With an AUM of SEK 3.8 billion, the fund mainly invests in small to medium-sized growth companies in Sweden that are involved in the IT, telecom, internet, media, biotechnology, energy and environmental protection industries. Another major shareholder of ClimateWell, Skirner, is a Swedish family business mainly engaged in property development. It is also the founder and major shareholder of SWECO, which is well-known for providing engineering and environmental consulting services in Northern Europe.