The abundance of sunshine east of the Cascade Mountains makes Central Oregon a prime location for generating solar power. Two adjoining solar facilities have been proposed east of Bend and others could soon follow. Installation costs have dropped in recent years, and requirements for Oregon utilities to use renewable energy increased this year. 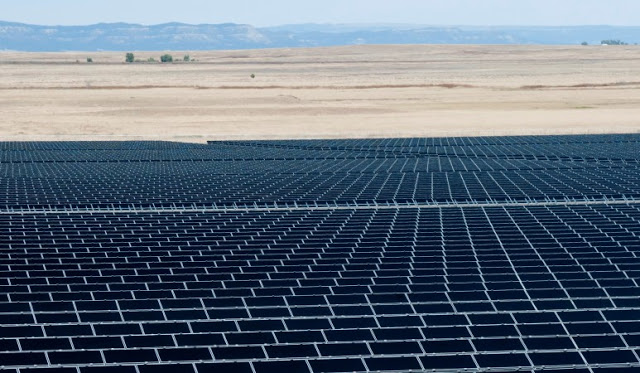 But that doesn’t mean solar panels will stretch across every square inch of the High Desert. The purchase price for solar power and the effect of competing energy sources could continue to dissuade some development companies.

A Deschutes County hearings officer will review the two proposed solar farms at a public meeting Tuesday in Bend.

The proposed solar facilities would cover about 70 acres on land zoned for farming and produce a combined 20 megawatts of electricity a year, enough to power 3,000 homes annually.

The solar projects are considered “qualified facilities,” meaning they can sell their power to utility companies at a set rate if they meet certain federal requirements.

Solar farms could be a welcome relief for landowners who are limited in what they can do with their property. Jodi and Harland Hafter own the land being proposed for solar panels north of Neff Road and are planning to lease the property for the facility.

“The reason we decided to do the solar is because our property is not viable for agriculture,” said Jodi Hafter.

“It’s pretty much a perfect deal for us and them,” she said. “Everybody wants a cheaper form of energy, and so we figured it would be a good thing for the area.”

Cathy Jensen lives next to the Hafters. She said some neighbors believe the solar projects will not have enough of a buffer space from property lines and Big Sky Park, which is to the west of the property and popular for its off-leash dog park.

“We would like the county to think very hard about the criteria for these,” said Jensen. “(Deschutes County) needs to think about what the implications are.”

Jensen added that the “massive array of solar panels” will give the area more of an industrial feel instead of rural farmland.

“It’s not that we’re against solar, but we’d like to see it be a more manageable size,” she said.

“These type of projects are very limited in Central Oregon,” said Jason Carr, a spokesman for Cypress Creek Renewables. “There are a lot of requirements necessary in order to have a site that is viable.”

The company has filed a conditional use permit with the county to develop the solar project. Solar power generation facilities are allowed in the exclusive farm use zone, according to county development code.

Carr said the company has no intention of selling power outside of the area. A Pacific Power substation is not far from the proposed facilities and can be connected. A 10-megawatt facility in Bend would be difficult to do because of the cost and availability of land. If the facilities are set up too far from the city, it would cost millions of dollars to connect to the substation, Carr said.

“There are a lot of issues that go into where and why these can be sited,” said Carr. “There’s very few sites where all those pieces come together.”

There are incentives for companies to develop solar-generating facilities. A solar investment tax credit reduces the amount of income tax paid by solar developers by 30 percent. That will change to 10 percent in December 2016. Facilities have to be operational by then if they want to receive the tax credit at 30 percent.

“It’s being significantly reduced, (but) some people think it might get extended and others think that might not happen,” said Brittany Andrus, a senior utility analyst with the Oregon Public Utility Commission.

Residential and commercial solar system installation costs declined between 1998 and 2013, according to the National Renewable Energy Laboratory, a federal research group studying energy technologies. Between 2012 and 2013 the costs dropped by 12 to 15 percent depending on the system size, according to the research group. Analysts expect the cost of installing systems to continue to fall.

Paul Israel, president of Oregon-based Sunlight Solar Energy Inc., said his company has looked at developing a solar facility in Central Oregon that could sell its power to utility companies. The amount paid by the potential purchasers of the power, however, is not enough to pay back investors and receive a profit, he said.

Israel said this part of Oregon is the best in the state for generating solar power and it’s terrible not to utilize it.

The Legislature passed legislation in 2007 requiring utilities to deliver a percentage of electricity from renewable resources. The required percentage from renewable energy jumped from 5 to 15 percent this year for Portland General Electric, PacifiCorp and Eugene Water and Electric Board, the three largest utilities in the state.

Israel said the requirement should be expanded to promote more solar energy in Oregon. The state requirement will increase to 25 percent renewable energy in 2025.