China-U.S. collaboration on solar thermal power generation, also known as Concentrating Solar Power (CSP), has been underway for some time. 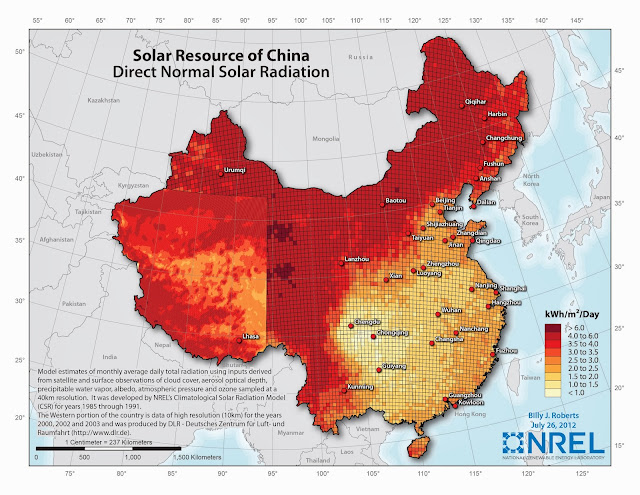 As the world’s two largest economies, energy consumers and emitters of greenhouse gases, the U.S. and China are uniquely positioned to cooperate – on policies, programs and technologies – in a way that can mutually benefit each country while serving as a model for effective engagement to address global climate change.

The investment community is taking note of the various factors that are moving in favor of renewables. According to the United Nations Environment Programme’s (UNEP) 9th Global Trends in Renewable Energy Investment 2015, “renewables are being seen increasingly as a stable – even relatively low-risk – investment by institutional funds. This is evident partly in the rising commitment by institutions to renewable power projects, and partly in their backing for green bonds, which hit a record $39 billion of issuance in 2014.”

“China has demonstrated its capacity to deliver original, integrated and optimized innovation,” the report notes. “Continued success will increasingly rely on joining and expanding international innovation networks and harnessing their power to collaboratively transform domestic and global energy systems.”

As this article explains, China-U.S. collaboration on solar thermal power generation, also known as Concentrating Solar Power (CSP), has been underway for some time. As a result, the first large scale demonstration projects will soon break ground, paving the way for continued technological innovation and market adoption.

Interest in Solar Thermal Technology on the Rise

CSP with thermal energy storage is one example of a flexible resource to help address the supply variability introduced by rapidly expanding wind and PV production. Recent studies [1] show the technology can play an important role in achieving global clean energy and climate goals by providing dispatchable power when it is needed most, improving reliability and reducing costs.

China has excellent solar energy resources, of which 70% is mainly concentrated in the Western and Northern provinces. The annual solar energy received by China’s land surface is estimated to equal the energy resource of 4.9 trillion tons of standard coal – approximately more than the total electricity output of 10,000 Three Gorges.

Image caption: China is rich with solar resources as shown in this solar insolation map.

Unlike photovoltaics (PV) that convert sunlight to direct current, CSP technology uses reflectors, generally mirrors, to focus sunlight onto solar receivers to heat a working fluid. In a CSP power-tower plant, an array of mirrors called heliostats track the sun on two axes and reflect the sunlight onto a central receiver that sits on top of a tower near the center of mirror field

The captured heat can then be converted to mechanical work in a turbine (or other heat engine) that drives a generator to produce electricity. Because heat can be stored more cost-efficiently than electricity, CSP technology also provides the foundation for a thermal energy storage system that can support plant operations according to market and power system needs, rather than depending on the immediate availability of sunlight.

In general, a thermal energy storage system includes a collection method, a reservoir, and a storage medium. Depending on CSP plant configuration and design, the storage medium may also be the working fluid of the CSP cycle or it can be a separate loop that communicates with the working fluid through a heat exchanger. This storage medium is heated (directly or indirectly) by sunlight and held in reserve until a later time when it is used to generate steam to drive a turbine for electricity production.

When integrated with thermal energy storage, a CSP plant provides the same operational attributes as a fossil-fueled thermal power plant. CSP plants incorporating thermal storage are actually more flexible than many existing coal plants because of the greater capability to utilize the full operating range of the turbine coupled with fast ramp rates. Because of the plant’s synchronous steam turbine generator, a CSP plant provides important reliability benefits, such as reactive power support, dynamic voltage support, voltage control and some degree of inertia response.

These plants effectively extend electricity production into later parts of the day and after sundown, whenever it is valued most by utilities and other power producers. This capability also helps reduces the cost of renewable power by increasing a plant’s capacity factor – the amount of energy produced in a given day – due to higher asset utilization. This provides utilities with greater operational flexibility to shape production and account for the variable nature of other intermittent resources. Additionally, it offers utilities and grid operators value in the form of balancing and shaping capabilities and ancillary services. In short, the flexibility offered by CSP and thermal storage compliments investments in other variable resources such as wind and PV.

China and the U.S. have a history of productive, bilateral engagement on energy and environmental issues, including, but not limited to, the following initiatives:

The U.S.-China Renewable Energy Partnership (USCREP) is one of seven U.S.-China clean energy initiatives announced by President Obama in 2009.  At the third annual Renewable Energy Industries Forum in July 2013, BrightSource Energy and Chinese renewable energy developer Huanghe Hydropower Development (Huanghe), a subsidiary of China Power Investment Corporation (CPI), announced a Memorandum of Understanding (MOU) to collaborate on the development of one of the first large-scale commercial CSP pilot projects in China.

BrightSource also entered into an MOU with the China Renewable Energy Engineering institute (CREEI) to share its successful experience in commercialization of CSP technology through guidance on site selection, construction and completion, potential cost reduction and training.

Since then, steady progress has been made towards this goal. In November 2014, BrightSource and Shanghai Electric Group Co., Ltd (SEC) announced the companies signed an agreement forming a joint venture for building utility-scale CSP plants in China. Under the agreement, the joint venture leverages both partners’ contributions to provide engineering, procurement and construction (EPC) services for projects featuring BrightSource’s solar power tower technology in China. The joint venture’s first proposal is for the construction of two 135 megawatt (MW) CSP plants as part of the first phase of the Qinghai Delingha Solar Thermal Power Generation Project, of which the majority owner is Huanghe. This will also benefit development of the future CSP market in China.

In March, 2015, the Qinghai Development and Reform Commission (DRC) issued its Review Conclusion on the Huanghe Delingha Feasibility Study. This document demonstrates that the Qinghai provincial government is supporting the project to proceed and complete the whole permitting process, which includes EIA, land approvals and other permits from different government entities.  This Qinghai DRC document will also enable the project to apply for feed-in-tariff supporting policy from the Price Department of NDRC.

The first phase of the Qinghai Delingha Solar Thermal Power Generation Project will use BrightSource’s proven solar tower technology to produce clean, reliable solar electricity to more than 452,000 residences. Located in the Qinghai province in northwest China, the Delingha project is planned for six 135 MW CSP tower plants. The first phase will include two 135 MW solar thermal plants with up to 3.5 hours of thermal energy storage. Construction of the first two plants is expected to begin in 2015 and be completed in 2017.

In support of the pilot project and the development of CSP tariffs in China, the U.S. National Renewable Energy Lab (NREL) and China’s State Grid Energy Research Institute co-organized and participated in a technical workshop in Beijing focused on modeling methods to estimate the economic and system value of concentrated solar power. The experts shared experience in making CSP a viable commercial option in the energy mix.

The potential for China’s CSP Market was identified in a comprehensive report published by the State Grid Energy Research Institute November, 2013. The report:

The report included a number of key findings to further CSP development in China:

Although CSP is still in the early stages of commercial application in China, it is closely related to traditional power generation, which helps in some way to lower the risk of technological development.

The development process for utility-scale renewable energy power projects is well understood. A site is the first requirement: investors must be assured of access to the site for construction and operation of the facility for the term of the contract (Site Control).

The renewable resource under development (sun, wind, biomass, or geothermal), needs to be characterized and understood at a level of detail and confidence appropriate to the project’s stage of development. Resource data is an important consideration and can impact the viability and marketability of a project, and there are a number of quality resources available for the South Africa market.

To provide the solar industry with a single document addressing the key aspects of solar resource characterization, National Renewable Energy Laboratory (NREL) recently released an updated handbook [2] on the best practices for collection and use of solar resource data, featuring new contributions from an international group of experts.

The off-take, such as a Feed-In Tariff (FIT), Tariff Policy, Power Purchase Agreement (PPA) or other agreement that includes the terms of sale of energy between the project owner and the buyer, and any other output of the project (such as renewable or carbon credits), generates funds to pay for the project. The off-take includes the necessary transmission access and related agreements needed to deliver the power to market

The remaining elements – permit, technology, qualified team and development capital – round out the list, and with every piece documented, the project will attract the financial resources necessary for construction, commissioning, and initial operations.

Raising and closing financing is the final element in project development – but it is important to note that capital requirements do not begin at construction; they are required throughout the multi-year development process. To successfully attract private financing, a project must be fully defined with risks and unknowns mitigated and allocated to appropriate parties.

China has established ambitious goals for CSP deployment. Despite a slow start, China remains a particularly exciting area for CSP with thermal storage applications, given the country’s strong commitment to diversifying and decarbonizing its energy mix.

Future growth opportunities will be based on continued collaboration between China and the U.S. governments, partnering among strong Chinese and U.S. companies, continued innovation and cost reduction of solar thermal technologies, and the growing global recognition of the value of CSP with thermal energy storage and its importance to renewables integration.

We are confident in China’s long-term commitment to promote a low carbon economy that expands the opportunities for clean energy technology, environmental protection and job creation for both countries. Once the policy and tariff support mechanisms that have enabled rapid expansion of wind and PV energy are in place, the benefits of CSP technology will be quickly realized.