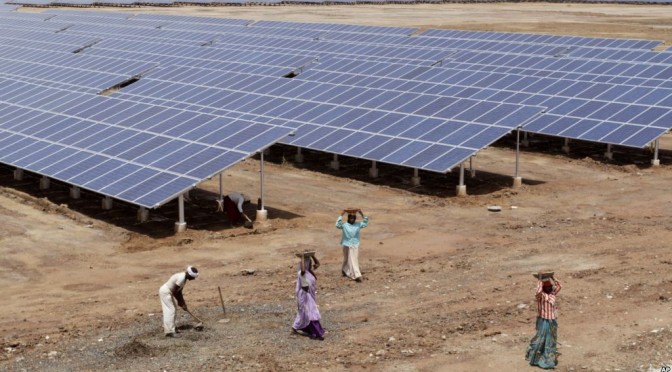 India’s plans to massively scale up solar power generation have got a big boost with a planned $20 billion investment by Japan’s SoftBank. 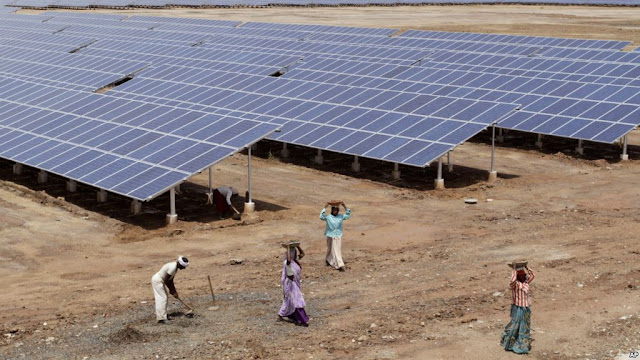 With two times the sunshine and half the cost of construction of a solar park compared to Japan,  Corporation head Masayoshi Son said India could become a world leader in solar energy.

That confidence has prompted the Japanese billionaire to make an ambitious entry in India’s solar sector through a joint venture with India’s Bharti Enterprises and Taiwan’s Foxconn. The group effort was announced earlier this week.

“We will make 20 gigawatts as a minimum commitment to make investment into the solar in India. That is in economic terms roughly $20 billion of investment,” said Son.

With nearly a quarter of the population still without an electricity connection and even big cities routinely grappling with power outages, India urgently needs to scale up power generation. Equally pressing is the need to switch to cleaner energy to reduce high pollution levels from coal-based power plants.

Hoping that solar energy can help meet both goals in a sun-drenched country, the government has set a target of generating 100 gigawatts of solar power by 2022. That is a huge step up from the 3 gigawatts being generated presently – less than one per cent of its total energy mix.

Tobias Engelmeier, who heads solar consultancy Bridge to India, said SoftBank’s investment in the sector is significant and could “shape the industry.” He said it shows the market is now responding to the government’s targets.

“There have not been enough international investments, investors, in India at the moment and this is one of the biggest signals. The second thing, is the sheer scale of it. If you talk of an investment at that scale, that will cover a significant amount: 20 to 30 to even 40 per cent of that ambitious government target,” said Engelmeier.

SoftBank is not the only one to be betting big on solar power generation. India’s Adani Group said last month it will invest nearly $10 billion in building a solar plant in Rajasthan state.

The plummeting costs of solar power in recent years are aiding India’s ambitions to generate more renewable energy from the sun.

Amit Kumar at New Delhi-based The Energy and Resources Institute said the cost of solar power is now only marginally higher than power generated by fossil fuels.

“A new power plant which is based on imported coal, probably the cost of generation would be somewhere around Rs. 5 (approximately 8 cents) per unit or so, and the cost of solar power, what we are talking today is somewhere around Rs. 6.50, Rs. 6.67 in those figures one is talking about. So even with conventional fossil fuel, grid electricity, it is quite close,” said Kumar.

But challenges remain. Son has said the pace of projects his joint venture is eyeing will depend on the support they get from state governments.

Engelmeier of Bridge of India said most of the concerns center around hurdles in acquiring land for projects because solar parks require large tracts of land. He said there are also concerns about inefficient electricity distribution companies.

“The grid in India is not very stable, it has huge losses. Then there is land, the government wanted to set up 20 solar parks. The government itself is struggling to aggregate the land for these solar parks. It relates to the very complicated land ownership structures in India,” he said.

Despite such hurdles, energy experts say the skepticism over whether the government can massively scale up solar power has been replaced with optimism that India is on track to become one of the largest solar markets in the world, sooner rather than later.