Gwynt y Môr wind farm, located eight miles offshore in Liverpool Bay, will be officially inaugurated by Carwyn Jones, First Minister of Wales. With an installed capacity of 576 megawatts (MW) Gwynt y Môr is the world’s 2nd largest offshore wind farm. In total, 160 wind turbines will produce enough power to supply some 400,000 residential households with renewable electricity per year. The inauguration of the more than £2billion wind farm is a significant achievement for RWE (60 percent) and its partners in Gwynt y Môr, Stadtwerke München (30 percent) and Siemens (10 percent). 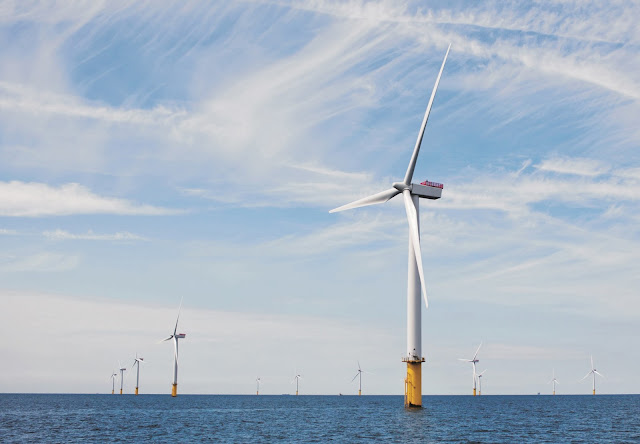 Carwyn Jones, First Minister of Wales, said: “Gwynt y Môr is a huge achievement and will continue to bring a number of benefits to the North Wales region. Local companies have been among those to benefit during construction and the site will bring high quality employment and opportunities for years to come. With young people receiving training as part of the wind turbine apprenticeship scheme at Grwp Llandrillo Menai and the courses offered at the college’s Energy Centre in Llangefni, North Wales is the go-to place for those looking for a workforce skilled in the field of energy.”

RWE AG’s Chief Executive Officer, Peter Terium, led the celebrations today at Gwynt y Môr’s Operations & Maintenance base, newly built at the Port of Mostyn.
Peter Terium said: “With today’s inauguration we are now definitely playing in the Offshore Wind Champions League! Thanks to our German wind park Nordsee Ost, inaugurated only 3 weeks ago and now Gwynt y Môr offshore wind farm will become the third largest player in the European offshore market. The expansion of renewable energy is one of our main growth areas. We currently expect to invest over 1 billion Euro up to 2017 in growing renewables, with wind power at the forefront of that investment.” Hans Bünting, CEO of RWE Innogy, adds: “At the end of this year 40 percent of our power generation from renewables will already come from offshore power production. Due to this increase in offshore capacity our operating result will see double-digit growth.?

Dr. Florian Bieberbach, SWM’s Chief Executive Officer: “Gwynt y Môr marks the second offshore wind park in which we are participating that has been successfully completed. Offshore wind is still a very young technology and entails a certain amount of imponderables. I am all the more pleased that we have now been able to successfully conclude the construction of Gwynt y Môr. First and foremost, I would like to thank our partners RWE and Siemens, and naturally all the others who played a role in realizing the park. Gwynt y Môr is a further significant building block in our Renewable Energies Expansion Campaign: by the year 2025, we want to generate sufficient green electricity to cover Munich’s entire consumption. This will put Munich on the map as the first city of over a million inhabitants to have achieved this goal!”

“Siemens has played a major role in Gwynt y Môr. Physically, by supplying both turbines and sub-stations and also by providing financing and a 12-year Service and Warranty contract,” Michael Hannibal, CEO Offshore and Siemens Wind Power and Renewables Division, said. “It has been an excellent team effort. Gwynt y Môr will benefit the UK economy by creating green jobs and growth as well as providing secure, sustainable and low-carbon energy for around 400,000 homes in Wales.”

The wind farm extends over an area of some 80 square kilometres. The 160 Siemens turbines with a capacity of 3.6 MW each and the 160 steel monopile foundations, some weighing up to 700 tonnes, were installed by means of installation vessels at water depths of up to 28 meters. Each turbine rises 150 meters above the mean sea level. In addition RWE and its contractors installed two massive offshore substations each weighing 1,300 tonnes and 134 kilometers of onshore cable installed.

Gwynt y Môr has created significant opportunity for Wales’ economy, worth over £90million to Welsh firms during construction, and will continue to do so throughout its operational life.