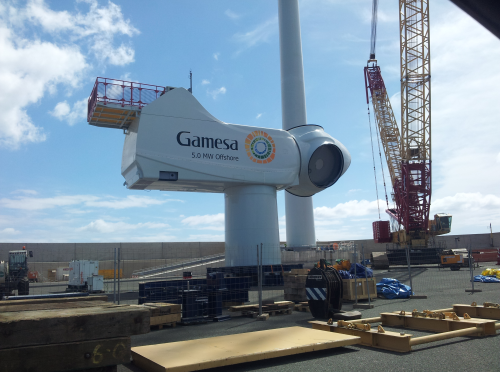 Gamesa, a global technology leader in wind energy, has celebrated the fifth edition of its Patents and Inventors Competition, which is designed to acknowledge its employees’ efforts to develop innovative new technology with the potential to set the company’s technology offering apart from that of its competitors.

This year’s prize has gone to a rotor positioning invention for which the patent application has already been filed. The invention is the brainchild of Ignacio Fernández Romero and Eugenio Plano Morillo, two engineers that currently work for Adwen, the offshore wind joint venture set up by Gamesa and Areva.

The rotor positioning system consists of an application that enables automatic turbine rotor blocking or their placement at certain angles, as opposed to manual positioning at present. This application permits the generator-converter to work as an engine, instead of generating power, in order to facilitate certain tasks, including operations and maintenance work, onshore and offshore, as well as the calibration of certain sensors.

Every year Gamesa assesses the best inventions developed by its technology experts. The company then selects which developments will be patented in accordance with a series of requirements and ultimately chooses the best one. Lastly, these inventions are acknowledged as part of the company’s Patents and Inventors Competition.

During the prize ceremony, Xabier Etxeberria, Gamesa’s Business CEO, underscored the importance of technological innovation to creating a competitive advantage for the company that sets it apart.

José Antonio Malumbres, Gamesa’s Chief Technology Officer, praised the innovative effort made by Gamesa’s technology experts: “This invention demonstrates, once again, Gamesa’s commitment to providing cutting-edge solutions. The goal is to continue to boost wind turbine reliability and availability while bringing down our customers’ the cost of energy”.

Gamesa has been one of the most active wind players on the patent front in recent years, with 184 patent families and a portfolio of 700 patents worldwide.