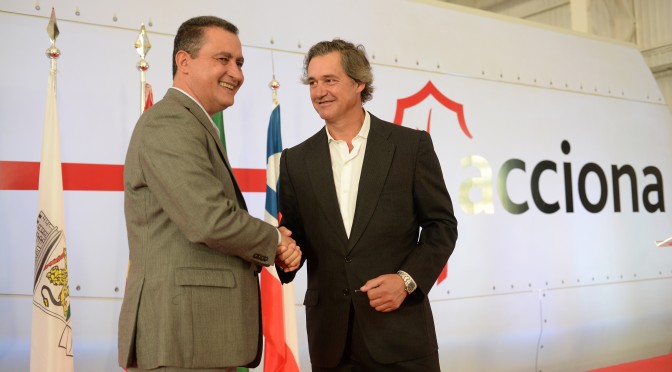 ACCIONA Windpower, the ACCIONA subsidiary dedicated to the design, manufacture and sale of wind turbines, has opened a turbine assembly plant at Simões Filho (Bahia, Brazil). It is already producing all the 3 MW machines for the Brazilian market. 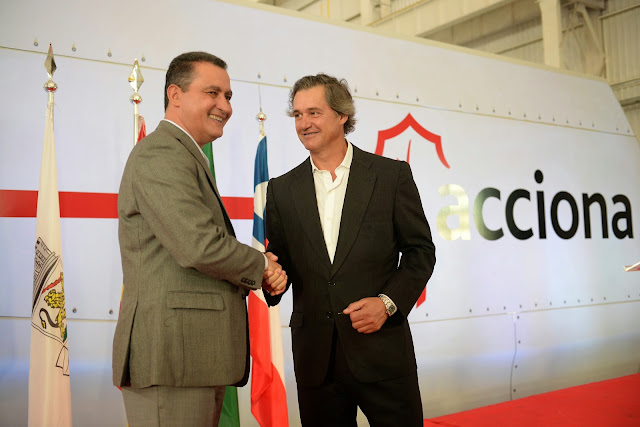 The opening ceremony was presided by the Governor of Bahia, Rui Costa dos Santos, who was accompanied by State Secretary for Industry, Trade and Mines, James Correia. ACCIONA was represented by Group President José Manuel Entrecanales, the CEO of the Energy Division, Rafael Mateo, and the Executive Director of ACCIONA Windpower, José Luis Blanco, together with senior managers in Brazil.

The Simões Filho plant has a production capacity of 100 turbines per year (300 MW), which can be increased to 200 units (600 MW) depending on demand. The facility has created 150 direct jobs and around another 500 indirect jobs, and it manufactures the hubs that ACCIONA Windpower previously produced at a location very close to the present one.

“This plant shows our industrial commitment to Brazil, today becoming a reality in Bahia, and is a testimony to the great reception given to our most advanced product – the 3 MW wind turbine – from wind power developers in the country.”

The entry into service of this plant, which assembled its first turbine in December 2014, is a direct result of the positive reception given to the AW3000 (capacity 3 MW) in the Brazilian market, evidence of its adaptation to the wind conditions of the country and its high level of competiveness.

Since it started marketing turbines in Brazil in 2012, ACCIONA Windpower has signed contracts for 1,020 MW. Over the period, the company has fulfilled the requirements for the gradual production in Brazil of components established by the BNDES (National Economic and Social Development Bank) under the FINAME regulations. This process enables wind power developers to gain access to finance on more favorable terms than those offered in the market.

At present, there are two wind power complexes in service in Brazil, with 3W turbines from AWP totaling 210 MW. Another two are under construction, totaling 201 MW, and those pending implementation represent 609 MW.

All these contracts have been signed for turbines with rotor diameters of 116 and 125 meters mounted on 100- or 120-meter-high concrete towers. The company is now supplying machines with a rotor diameter of 132 meters and a tower height of 137.5 meters.

As well as the new wind turbine manufacturing facility, the company has a plant to manufacture sections for concrete towers located at Areia Branca (Rio Grande do Norte).

ACCIONA Windpower has a workforce of 288 people in Brazil at present. The company’s operations have created (or consolidated) more than 1,000 direct and indirect jobs in the country.

The ACCIONA Group has been present in Brazil since 1996. It has carried out major infrastructures projects, among them part of the Metros of São Paulo and Fortaleza, the Mario Covas ring road around São Paulo, the extension and concession of the BR-393/RJ highway in Rio de Janeiro and the installation of a wastewater treatment plant and pipe network in São Gonzalo.