Minas Gerais, the south-eastern state of Brazil, will start auctions of solar photovoltaic power plants this year and will support the initiative with an initial $324 million. 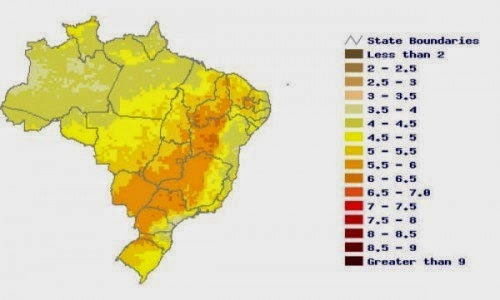 An estimated total investment of $1.66 billion will be required from the developers to complete the 31 solar parks.

Brazil has become a very attractive market for renewable energy investments with leading global firms like Enel Green Power and SunEdison aiming to significantly expand their footprint in this emerging market.

A floating solar PV project of 350 MW on the Balbina hydroelectric plant was announced earlier this year and once completed it will be among the largest floating solar power applications in the world.

The state government said that it will enable the auction of large-scale solar energy projects in August.

The projects which are expected to be commissioned in 2017 and the government has committed to investing $324 million towards the programme.

The investment is not expected to go towards the development of manufacturing units for solar PV modules as well as solar power plants.

A national solar power auction was held in 2014 and reports did not clarify whether the Minas Gerais would auctions would differ from the federal version.

400 projects received bids with total generation capacity of about 10 GW and a total of 31 solar power parks were auctioned to developers representing 1,048 MW.

20-year power purchase agreements are in place that will see the power generated from the projects sold and incorporated into the grid effectively.