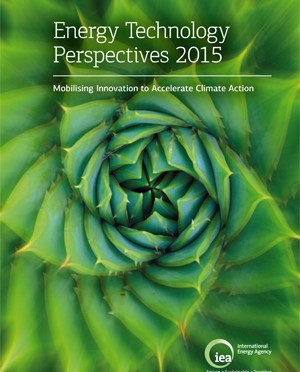 A concerted push for clean-energy innovation is the only way the world can meet its climate goals, the International Energy Agency said as it released its flagship energy technology report.

The report, Energy Technology Perspectives 2015 (ETP 2015), shows that despite a few recent success stories, clean-energy progress is falling well short of the levels needed to limit the global increase in temperatures to no more than 2 degrees C. Moreover, it will be challenging for the world to meet its climate goals solely through the UN negotiation process that is expected to yield an agreement this December in Paris. That leaves the development and deployment of new, ground-breaking energy technologies as key to mobilising climate action, and the report urges policymakers to step up efforts to support them.

“The stakes are high for the energy sector, but it is also no stranger to profound technological change. An incredible chain of innovations in the energy sector has been at the vanguard of social and economic transformation for over a century, and it is exciting to see the progress being made by solar panels and fuel economy improvements for passenger cars today, to name but two,” said IEA Executive Director Maria van der Hoeven.

“But we cannot be complacent,” she continued. “We are setting ourselves environmental and energy access targets that rely on better technologies. Today’s annual government spending on energy research and development is estimated to be USD 17 billion. Tripling this level, as we recommend, requires governments and the private sector to work closely together and shift their focus to low-carbon technologies.”

ETP 2015 provides a comprehensive analysis of long-term trends in the energy sector, centred on the technologies and the level of deployment needed for a more environmentally sustainable, secure, and affordable energy system. Recent success stories, such as the rapid growth of solar photovoltaics (solar PV) and last year’s inauguration of the world’s first large-scale power station equipped with carbon capture and sequestration (CCS) technology, clearly indicate that there is significant and untapped potential for accelerating research and development in clean technologies.

Yet research and development alone are insufficient for moving new technologies from ideas to commercial products. Governments have a key role to play in creating the initial market opportunities that send a signal to innovators and drive investment. One success story involves public support for renewable energy technologies: while it has not always been efficiently targeted, it has transformed the market outlook for wind and solar to the extent that they are now the lowest-cost source of power in a number of regions.

“This result, unthinkable only a decade or so ago, is the power of innovation,” said Maria van der Hoeven. “Given our current climate realities, more of that power must be unleashed on the world.”

Like all IEA publications, ETP 2015 does not make long-term forecasts. Instead, it is built around economic modelling scenarios – each of which shows what mix of energy technologies would need to be deployed to obtain a specific climate outcome. The main scenario of ETP 2015 — the 2-Degree Scenario, or 2DS – illustrates a transformed global energy system in which cumulative carbon emissions from fossil fuels are reduced by 40 percent relative to the “business-as-usual” scenario, or 6DS.

ETP 2015 analysis shows that the 2DS does not just allow global climate goals to be met but also enhances energy security. Best of all, it makes economic sense: for every dollar invested in the clean-energy technologies that drive the 2DS, nearly three dollars in fuel costs are avoided by 2050.

ETP 2015 includes the annual Tracking Clean Energy Progress report, which for the first time looks at progress in storage and hydrogen technology.

ETP 2015 analysis says that fostering innovation of low-carbon products and processes in industry is essential to meeting global decarbonisation goals. The report demonstrates the opportunities and challenges across the entire innovation chain of various sectors for global industrial actors. In the 2DS, almost 30 percent of direct industrial CO2 emissions reductions by 2050 hinge on processes that are in development or demonstration today.

Finally, the report says that building and maintaining strong innovation capacity in emerging economies will be key to successful deployment of sustainable energy technologies where they may have the largest impacts. Domestic innovation of low-carbon technologies in emerging economies is increasing, with some countries – especially China – closing the gap in key areas.

Maria van der Hoeven stressed that for obvious reasons, ETP 2015 can only model existing technologies. But she noted that the right support to innovation coupled with effective public-private partnerships can provide the energy technology breakthroughs that could amplify or hasten the low-carbon transition.

“The shale gas and shale oil boom of the last few years was virtually unthinkable at the dawn of this century,” she said. “If we only stick to the beaten path of today, we will miss the game-changers of tomorrow.”

Energy Technology Perspectives 2015 is for sale by the IEA bookshop.