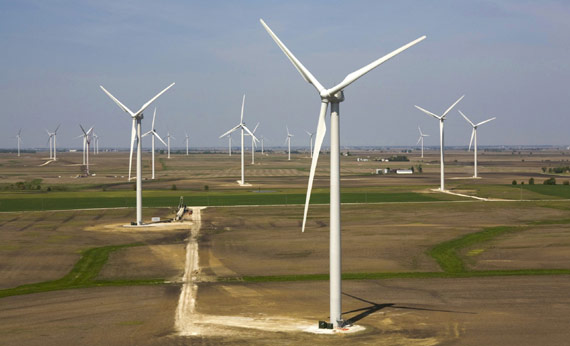 New EPA rules coming down the pike will cut carbon emissions from coal and gas power plants for the first time and boost demand for clean power such as wind.

One result: Indiana could see two or three times as many wind farms as it has now.

In its latest projection of U.S. wind energy needs, the federal Department of Energy says only five other states are in line to boost their wind power sectors as much as or more than Indiana.

Indiana has a good shot at tripling its wind power capacity in the next decade or so, from the current 1,744 megawatts to 5,000 or more, says Sean Brady, Midwest policy manager for the wind power advocacy group Wind on the Wires.

That would require erecting 2,000 wind turbines to join the 1,031 that now dot the state’s landscape north of Indianapolis. “Indiana has quite a large upside. It has a great opportunity for wind development,” Brady said.

If growth of that magnitude occurs, investment in the state’s wind farms would have to soar from $3.7 billion to more than $10 billion, making wind farms one of the most expensive industrial installations in state history.

Whether wind power actually has that kind of upside, however, depends on a few cards being played just so.

For one thing, not everyone in the public policy arena thinks that wind is the way to go. It is, after all, a variable power source that you can’t rely on to generate the juice when needed. (Indiana’s four-season winds are especially fickle, with a fivefold difference in breeziness between the least windy month, August, and the windiest, November. Regional power grid operator MISO tracks wind power use by the hour and posts it online.)

Wind power, in addition, is expensive to install ($2 million or more per turbine) and controlled to a great extent by foreign companies, which doesn’t bode well for winning a lot of public support.

Also, demand for wind energy depends on Congress renewing the federal tax credit that wind developers rely on to be price-competitive with other forms of energy. The credit expired at the end of last year and renewal isn’t a given.

And one last thing: The proposed EPA CO2 rules are fraught with sticky issues, gray areas and unknowns that could tip in favor of wind or against it, depending on how they’re finally written.

“So much is up in the air,” said Joan Soller, director of resource planning at Indianapolis Power & Light Co.

One particularly sticky issue: EPA’s proposed “clean power plan” rules don’t give a utility any credit, under the CO2-lowering mandates, for using green energy in its generation portfolio if it buys wind power from outside its home state.

If that proviso stands, Indiana’s wind industry could be hurt because it currently sells the bulk of its power to non-Indiana utilities. They would be newly motivated to drop their Indiana contracts and buy their green energy from wind farms in their own states.

Utilities and other interests are lobbying the EPA to drop the rule giving credit only to home-state-bought green energy. The final EPA rules are expected out this summer. States also will have a say in the matter, so they’ll have to be lobbied, too. (Some states also are fighting the CO2 rules in court.)

Whatever happens, Indiana likely won’t lose its standing as a big player in wind energy. It’s just too good a place to site wind farms.

The northern reaches of the state not only are prairie-flat, but they’re close to Chicago, Indianapolis and other big population centers that gobble megawatts of electricity. The state also overlaps the territories of two electrical system operators that distribute power from Canada to Louisiana and points east and west.

And, of course, it’s windy.

Wind farm developers in Indiana are already scouting out locations for new farms as the new EPA mandates march closer.

Spanish-owned EDP already controls about 40 percent of the state’s wind turbines through its Meadow Lake wind farm in White County and its newly opened Headwaters farm in Randolph County.

Most of Indiana’s turbines were erected from 2008 to 2012. Growth has since slowed. Last year, Headwaters was the only major wind farm to open.

A proposed project in Benton County and another in and around Rush County are seen as leading contenders to be built next. Those projects would have about 70 turbines each.

In Indiana, “the easiest-to-develop projects have been developed,” and much of the best available ground for catching steady wind is taken, said Tristan Vance, director of the Indiana Office of Energy Development. “But I think we will see future projects here. We’ve been fairly open for wind development.”

Though the best sites for wind farms might indeed be snapped up, technological improvements have given the industry taller turbines with larger and lighter blades that capture more wind at higher altitudes than older, smaller turbines.

That should allow wind developers to continue to profit from Indiana’s wind at new sites with new turbines, said Brown of EDP.

At its Headwaters farm, EDP installed new turbines 312 feet tall from ground to gearhouse, with blades 180 feet long. Turbines at EDP’s older farm in White County along I-65 are 262 feet tall with blade lengths of 134 to 144 feet.

Because the bigger machines can catch more wind, they generate electricity about 40 percent of time, compared with about 33 percent of the time for the shorter turbines, Brown said.

(Turbines likely won’t get any taller. The Federal Aviation Administration requires special, harder-to-get approvals for turbines that exceed 500 feet from their base to the tip of an upright blade. The new turbines at Headwaters are just about at that 500-foot limit.)

With the bigger turbines, “Indiana is looking very attractive” for wind farm development down the road, said Michael Goggin, senior director of research for the American Wind Energy Association, a trade group for the wind industry. “At that height, (wind) is a very attractive resource in Indiana. It’s like being in the plains at that altitude.”

Any growth in wind farms also would put more money in the hands of farmland owners, who rent the land needed for the turbines. Average rents in Indiana now run about $5,000 a year per turbine, which amounts to about $5 million a year in statewide turbine rent payments.

For those who can get it, wind turbine rent “is pretty significant, especially if you have multiple turbines on a farm,” said Justin Schneider, senior policy adviser and counsel at Indiana Farm Bureau. “It can take off some of the risk of crop production if you have a bad year.”

Schneider said he thinks most Indiana farmland owners would be eager to rent their land for any new wind farm proposals that pop up.

Still, pushback to wind persists at policymaking levels. And that opposition could harden as wind energy use spreads and utilities are forced to spend billions of dollars nationally building transmission lines to handle the increased flow of power from new wind farms, said Tom Tanton, director of science and technology assessment at the Energy & Environment Legal Institute in Washington, D.C. The group has done studies suggesting federal subsidies to wind energy don’t make economic sense.

Tanton said wind farm developers are able to push “hidden costs” of wind energy onto utilities and ratepayers. Those costs include gas turbine plants required to back up wind power and balance its fluctuating energy flows caused by intermittent wind, he said.

Existing backup power sources can handle the fluctuations of wind energy now, since it supplies only about 4.5 percent of U.S. electrical use, Tanton said. But if wind energy boosts its share of the market much beyond that, a fleet of costly new backup gas turbine plants that can turn on and off with short notice will be required, he said.

IPL’s director of project development, Richard Benedict, said it’s tough for a utility to even calculate the true cost of electricity from wind energy because of the need for backup capacity.

Wind-generated electricity is so variable it almost doesn’t count as power in a conventional sense. IPL, for instance, has long-term contracts to buy 300 megawatts of electricity from wind farms in Indiana and out-of-state. But the Indianapolis utility can’t count those megawatts when calculating its official electrical capacity because they’re not reliably available, Benedict said.

Still, the coming of the CO2 rules might force IPL to buy much more wind-generated electricity in the future. Under its pending rules, the EPA won’t allow IPL to claim CO2-lowering credits for the 66 percent of wind energy it now buys out-of-state, or for converting its coal-fired Martinsville plant to natural gas (because the conversion won’t happen by the deadline set in the rules).

If IPL can’t get credit for those green energy moves, it might have to turn to buying in-state wind energy in a big way.

IPL officials are trying to get their minds around the fact that they might have to buy as much as 1,000 megawatts of wind energy to meet the coming carbon-lowering standards. That move alone would create the demand for a 60 percent build-out, of about 600 turbines, in Indiana’s wind farms.