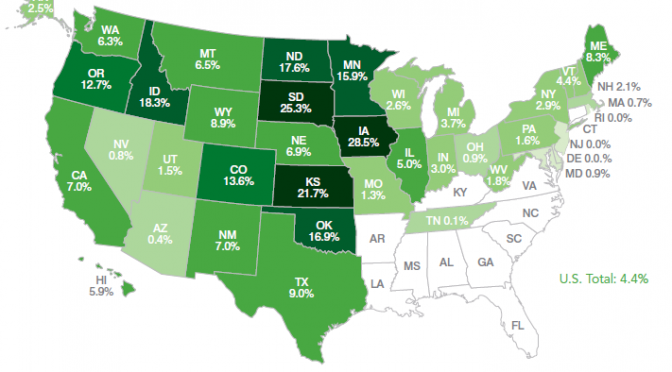 American Wind Energy Association (AWEA) released its 2014 U.S. Wind Industry Annual Market Report, which showed the benefits of the 2014 rebound in wind energy. Here are 10 of the top trends in the industry.

3. WIND BENEFITS EVERY STATE: There are utility-scale wind projects or active wind-related manufacturing facilities in all 50 states. Even in regions like the Southeast without utility-scale projects, there are significant jobs in manufacturing, project development, and other areas. In fact, over 70 percent of U.S. Congressional districts have operational wind energy projects or active wind-related manufacturing facilities. The 73,000 jobs in wind are spread across all 50 states.

4. COSTS PLUMMET: The cost of wind energy dropped over 50 percent between 2009 and 2013, with the industry continuing to advance technology in several areas, from improved siting techniques to larger rotor diameters and taller towers that are increasing energy production across the country and opening up new regions for development. Taller turbine towers are raising the prospect of significant wind development occurring in the Southeast in the near future.

5. WIND TOP SOURCE OF NEW GENERATION: Wind energy was the largest source of new generation in the U.S. It was the primary choice for new power in the wind-rich regions of the Midwest, Pacific Northwest, and Plains states, providing 60 percent or more of all new electric generation capacity between 2011 and 2014. Wind’s market share was as high as 80 percent in the Midwest.

6. CORPORATIONS WANT WIND: Over 23 percent of the MW contracted through 2014 power purchase agreements were with non-utility off-takers including Amazon, Microsoft, the General Services Administration (GSA), Walmart and Yahoo! Many of these companies and organizations explained that they were attracted by wind energy’s unique ability to offer stably-priced energy, given its lack of fuel cost uncertainty.

7. CARBON AND WATER SAVINGS GREATER THAN PREVIOUSLY THOUGHT: Wind energy production avoided an estimated 125 million metric tons of carbon dioxide during 2014 – more than 5.7 percent of U.S. power sector emissions – while avoiding the consumption of over 68 billion gallons of water. This was estimated with a new tool that shows these benefits are even greater than previously thought.

8. NEW TRANSMISSION OPENS NEW AREAS FOR DEVELOPMENT: Texas is currently undergoing a wind boom thanks to the Competitive Renewable Energy Zone network of new transmission lines. That success will soon be replicated in other areas, as the grid operators SPP and MISO have adopted similar policies for planning and paying for transmission and are beginning to build major new transmission upgrades.

9. NEW WIND RECORDS SHOW ITS RELIABILITY: Three states (Iowa, South Dakota and Kansas) now reliably generate more than 20 percent of their electricity from wind power. At times, wind energy has provided more than 60 percent of electricity on the main Colorado power system, and nearly 40 percent on the main Texas power system. Record wind output also helped to keep the lights on during extreme cold snaps in January 2014 and 2015.

10. U.S. LEADS WORLD IN WIND: The U.S. leads the world in wind energy generation, producing over 181 billion kWh of wind energy during 2014 or enough electricity to power over 16.7 million homes.