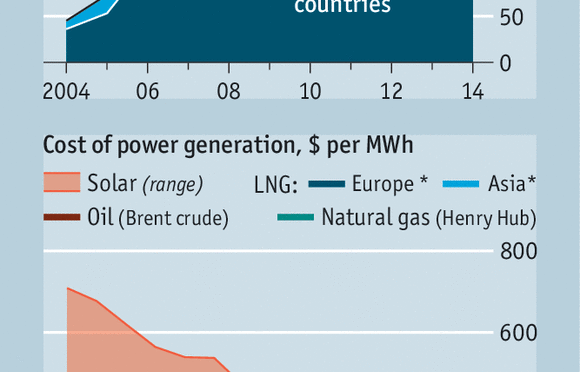 Global investment in clean energy slumped 15 percent in the first quarter to the lowest level in two years because of a decline in wind and utility-scale projects.

About $50.5 billion was invested in the first three months of 2015, the least since the first quarter of 2013 when spending on clean energy totaled $43.1 billion, according to research released Friday by Bloomberg New Energy Finance. The figure a year earlier was $59.3 billion.

The rising U.S. dollar stifled spending, and nations that previously spent big invested less, the London-based research company said. The key question for clean energy was how much it would be affected by slumping oil prices, and “these figures indicate the answer is not so much,” Michael Liebreich, chairman of the company’s advisory board, said in a statement.

Discounting the effects of currency variations and some large offshore wind investments in 2014, clean-energy spending “this year would have been pretty much level-pegging with last year,” Liebreich said.

“There’s sort of a natural effect effect that if you have a strong year, it’s difficult the next year to go much above that,” said Angus McCrone, a senior analyst at the research company. “It’s too early to say it’s a meaningful fall in investment that’s going to be continued through the year.”

U.S. clean-energy investment edged up 2 percent to about $9.6 billion. India saw gains of 59 percent to $1.6 billion as the nation seeks to add 170 gigawatts of renewables by 2022. Spending in South Africa was about $3.1 billion, compared with “almost nothing” a year earlier, according to BNEF. 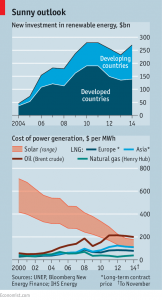 South Africa has emerged as one of the most important centers for clean-energy investment, as it seeks to expand power capacity and take advantage of its sunshine and wind resources.