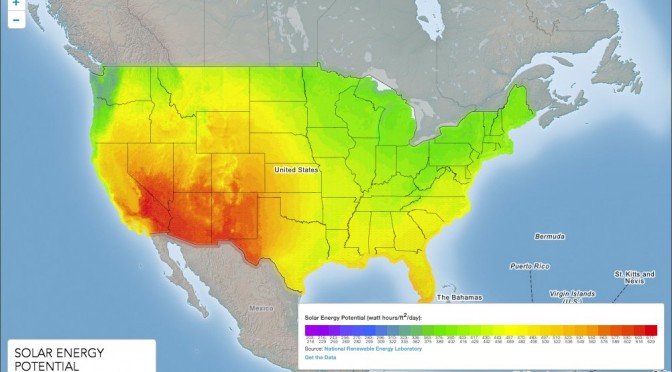 In 2010, the solar power installed in the United States was less than 1,000 megawatts (MW), while in 2014 it has almost grown by seven times to 6,967 MW, including both solar photovoltaic (PV) and concentrated solar power (CSP), with an investment of 17.8 billion U.S. dollars.

Shortly after his visit to a solar array in the state of Utah Friday, U.S. President Barack Obama announced an initiative to train 75,000 workers for the solar industry by 2020 as it has become an engine for creating jobs in the past few years.

The solar industry currently employs 174,000 workers in the United States, while more than 80,000 were employed in the last five years, about 46 percent, as the industry is running on a fast track, said the U.S. solar energy industries association (SEIA).

“This remarkable growth is due, in large part, to smart and effective public policies,” said Rhone Resch, president and CEO of the SEIA, citing policies like the solar investment Tax Credit ( ITC), Net Energy Metering (NEM) and Renewable Portfolio Standards (RPS), which are paying huge dividends for the industry.
The solar ITC, first adopted in 2006, gives a person or company 30 percent federal tax cut on the their investment in solar industry or purchase of solar energy technologies till Dec. 31, 2016, which has greatly stimulated society to invest and use solar energy. President Obama has proposed to extend the ITC permanently in his 2016 budget.
People who joined in the NEM program can sell their electricity generated from their own solar system to the utility to offset their electricity bills, while the RPS, designed by the states, set a state-wide percentage of electricity generated from renewable energies. California, the state that generated the most solar electricity in the United State in 2014 has recently signaled that it wanted to raise the percentage of electricity from renewable resources from the current 33 percent by 2020 as the target will be reached ahead of the schedule.
“An important factor for renewable energy development is from the mandates of the states which will not be affected by the current lower oil prices,” Mikkal Herberg, an energy expert at the National Bureau of Asian Research, told Xinhua in a recent interview.
In addition to the government stimulus, the market situation and people’s increasing awareness of renewable energies have also helped the quick and consistent development of U.S. solar industry.
At present, the cost for building a completed commercial PV project has dropped by 45 percent since 2012, as the solar panel price fell more than 60 percent compared with 2010. A new business model called third-party solar financing has also been created in recent years which has greatly lowered the cost for a family to install and maintain its solar system.
A total of 71 percent of American people believed the United States should pay more attention to the development of solar energy in future, higher than any other energy resources, according to a Gallup survey in 2013.
In 2014, for the first time in history, each of the three major U.S. market segments — utility, commercial and residential — installed more than 1,000 MW of PV, said the SEIA in its year book, adding that for the first time more than half residential solar installations came on line without any state incentive.