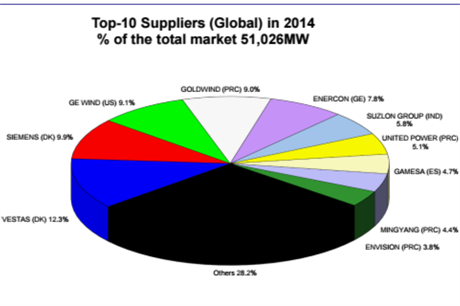 The finding is in contrast with Make Consulting, which found Siemens had taken over the number one spot due to a strong offshore performance. One key difference between the two surveys is Make uses grid-connected installations.

Other notable changes to the list include the disappearance of Nordex from the top 10, despite a record year of installations. In 2013, it was in tenth place but a year later has been replaced by Chinese manufacturer Envision with 3.8% of the global market.

Enercon took another big drop in market share, taking only 7.8% compared to 9.8% in 2013. There was a strong performance from Chinese manufacturers on the back of a resurgent Chinese market, with four in the top 10.

In terms of market trends, the report found the average turbine size had only marginally increased to 1958kW. In 2013, the average size was 1926kW rising over 70kW on 2012.