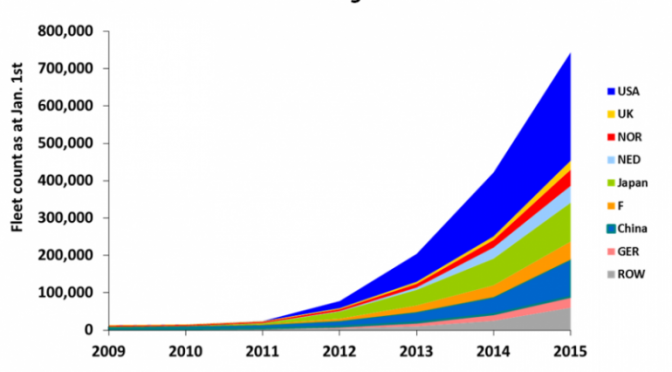 The Leaf is the best-selling electric car in automotive history. The Netherlands has the second-biggest market share of electric cars, after Norway.

Electric cars made up less than half of a percent of the 85 million new vehicles sold in the world last year, but German energy researchers say that tiny wedge of sales accounts for almost half of all battery-powered passenger vehicles on the road today. The demand has grown so rapidly that the market for the batteries going into these cars is expected to grow more than sevenfold by 2020.

The data show not only a recent explosive growth in electric cars, but a clear link between government incentives, mainly through tax breaks, and the wider adoption of vehicles that more efficiently use energy and help reduce smog and the respiratory ailments caused partly by vehicle exhaust.

What these leading countries have in common is that electric mobility’s upward trajectory is largely attributable to market incentives,” says a report released Monday by Centre for Solar Energy and Hydrogen Research Baden-Württemberg (ZSW) in Stuttgart. “As in preceding years, Norway is living up to its reputation for pioneering this trend.”

The researchers looked at vehicle registration data, a common proxy for comparing car sales in different countries, and counted the total to be about 740,000 worldwide for 2014, excluding motorcycles, buses and trucks.

U.S. consumers bought 117,000 all-electric vehicles in 2014, led by the Nissan Leaf, Tesla Model S and BMW i3, putting the total number of EVs at about 290,000. While the U.S. leads in total number of electric cars, the market share remains well under 1 percent. Norwegians more than doubled their EV fleet last year, to 43,400, leading the world with a 1.6 percent market share.

Germany, a country known for its progressive and forward-thinking policies on alternative energy, has been relatively conservative in its use of tax incentives, so it lags behind other European countries in EV adoption rates with only 0.07 market penetration.

Meanwhile, China is moving in the other direction, going as far as subsidizing the domestic manufacture of electric cars. This is part of China’s two-prong strategy: to encourage Chinese consumers to buy Chinese-brand cars and to encourage wider adoption of electric cars to help the country’s smog-choked cities. Chinese consumers bought 54,000 electric cars last year, a 120 percent jump but a blip compared to the more than 20 million new cars bought in China in 2014.

Electric cars might still be a tiny part of a massive industry, but the recent growth has caught the attention of suppliers, including Korean manufacturer LG Chem Ltd., China’s BYD and Japan’s Panasonic Corp., which is working with Tesla Motors to build the largest lithium-ion battery plant in Nevada.

Werner Tillmetz, a head of ZSW’s electrochemical energy technologies division, says the market for electric car batteries will grow from about $2.18 billion last year to $16.4 billion in 2020, right about the time Tesla’s so-called “Gigafactory” is expected to be fully operational.