This is the first of its kind joint venture between Brazil and Uruguay to harness wind energy for energy security.

Suzlon is responsible for complete Engineering, Procurement and Construction (EPC) and life-time service thereon of the Wind Farm at Artilleros. The 65.1 MW Wind Energy is located on state-owned land near Tarariras city in Uruguay’s Colonia province. The energy farm includes Suzlon’s 31 WTG’s (Wind Turbine Generators) of S95-90 make with a rated capacity of 2.1 MW.

Tulsi R. Tanti, Chairman, Suzlon Group said, “The successful completion of the maiden project in Uruguay is a strong testament to Suzlon’s diversified product portfolio that seamlessly caters to different markets and geographies. We stand committed to build on our technological edge and offer new age products and best in class services. Suzlon is committed to contribute to Uruguay’s energy basket by reducing its carbon footprint and achieve the country’s vision of energy security and low carbon economy.”

Rouar S A is a joint venture (JV) set up by Brazilian federal power company Electrobras and Uruguayan partner Administración Nacional de Usinas y Trasmisiones Eléctricas (UTE). The power generated from this project will be fed into Uruguay’s national grid to meet the region’s energy needs. Uruguay aims to
increase its energy from renewables in its total primary consumption to 50% by 2015 as compared to about 40% in 2012. 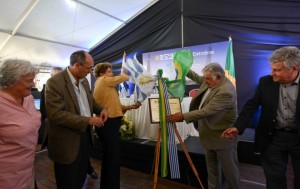 Construction of the Artilleros wind farm started in January 2014 and is Electrobras’s first international investment. UTE is building another 468.1MW at six wind farms. Uruguay ended 2014 with 700MW of installed wind power capacity, up from 59MW a year earlier. The country is expected to end 2015 with 1GW of wind and meet its target to source 15% of its power supply from renewables.

Suzlon takes immense pride in powering Uruguay with clean energy wind projects. The Uruguay government with its focused approach on enhancing its renewable energy portfolio is aligned to the dual objective of sustainable development by ensuring Uruguay’s energy security.

Suzlon is committed to social, economic and ecological sustainable development across its areas of operations. With an investment cost of USD 107 million, the project will contribute to reducing Uruguay’s carbon footprint by eliminating approximately 0.11 million tonnes of CO2 emissions per annum. The 65.1 MW project will light up ~20300 households in Uruguay with clean energy.