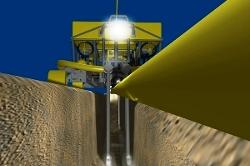 First ever power interconnector between Norway and Germany will be Nexans’ largest subsea power cable contract to date in terms of length and value Contract value is approximately 0,5 Bn Euros.

The Norwegian and German power grids will be able to share green energy directly for the first time thanks to Nexans submarine HVDC (high voltage direct current) cables to be installed as part of the NordLink project. Nexans will design, manufacture and install two 525 kV cable subsystems, with a total length of more than 700 km, off the coast of Norway and Denmark. The project, Nexans’ largest of this type to date, is due for completion in 2019. The contract value is approximately 0.5 Bn Euros.

The 1400 MW NordLink VSC (Voltage Source converter) HVDC project, a collaboration between Statnett,  TenneT and the German promotional bank KfW, will connect the Norwegian and German electricity markets to exchange green energy. Surplus wind and solar power produced in Germany can be exported to Norway. Conversely, hydroelectric power from Norway can be exported to Germany. This will be an important contribution to the future development of climate-friendly energy.

Nexans will design, manufacture and install mass impregnated non-draining (MIND) HVDC cables at depths down to 450 metres off the coast of Norway and Denmark. The cables will be laid by Nexans’ own cable-laying vessel, C/S Nexans Skagerrak  and protected on the seabed by trenching with Nexans’ Capjet system.

The Nexans power cables will feature the same reliable and well proven design implemented for the successfully completed installations of the Skagerrak 1, 2, 3 projects, and more recently the Skagerrak 4 project for the 140 km subsea HVDC interconnector between Denmark and Norway.

Dirk Steinbrink, Nexans Senior Executive Vice President High Voltage & Underwater Cables, said, “The NordLink project will be Nexans’ largest subsea power cable contract to date in terms of length and value and we look forward to continuing our close working relationship with TennetT, KfW and Statnett on this important project. The key to this success is our state of the art subsea cable technology combined with the proven capability to handle complete turnkey projects from design through to installation. We are excited to be involved in the Nord.Link which is a further step towards a complete integration of the European power grid.”