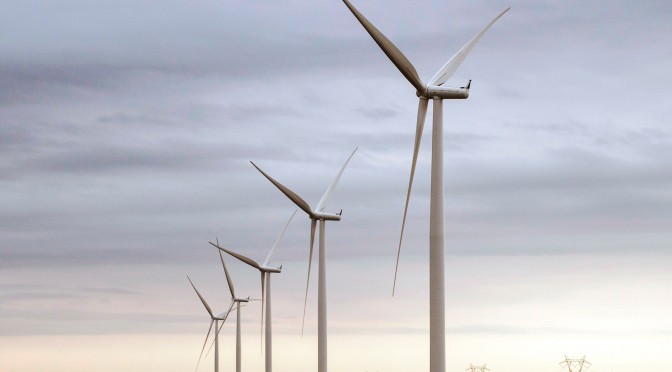 Siemens announces that it will supply 21 wind turbines to NJR Clean Energy Ventures (NJRCEV), a subsidiary of New Jersey Resources (NJR), for the 48-megawatt, Kansas-based Alexander wind project, located in Rush, Kan. A service and maintenance agreement was also signed to help ensure the turbines operate at optimal levels.

NJRCEV will be investing up to approximately $85 million in the Alexander project, and is responsible for constructing, owning and operating the wind farm. The Alexander wind project is expected to be operational in the fall of 2015.

The Alexander project, located 120 miles northwest of Wichita, covers 7,000 acres of rural agricultural land, and will produce energy for customers through PPAs.

The nacelles for this project will be assembled at Siemens nearby facility in Hutchinson, Kan. and the blades will be manufactured at the Siemens blade facility in Fort Madison, Iowa.

“We have 400 employees at our Hutchinson facility, and take a tremendous amount of pride in our community, our company, supporting our customers and what we manufacture. This project has a special meaning, as the Alexander wind farm is just up the road from our nacelle assembly plant,” says Jacob Andersen, CEO Onshore Americas, Siemens Wind Power and Renewables Division.

Siemens recently hit the 10-GW installed capacity milestone in the Americas, with its 5,600 installed wind turbines in Canada, the U.S. and South America. Nearly 5,000 wind turbines are in the U.S., and are capable of producing clean, renewable power for more than 2.5 million households every day.

“Wind power in the U.S. continues to show its value as a reliable, cost-effective and clean form of energy, and this partnership between a committed investor, high-quality vendors and willing customers is a great example of the commitment to wind power and renewable energy in the U.S.,” adds Andersen.

Siemens 300,000-square-foot plant in Hutchinson assembles nacelles, which sit atop the wind tower, supporting the rotor and housing components for electric power generation, including the gearbox, the drive train and the control electronics. The 90-ton nacelles produced there are used in Siemens reliable G2 2.3-MW wind turbine product family.

Siemens has invested heavily in its wind power business, with the Americas representing more than 50 percent of its installed base during the past 10 years. The company opened its Americas headquarters for Wind Power in Orlando, Fla. in 2005. In 2006, Siemens started producing wind turbine blades at the Siemens Blade Facility in Fort Madison, Iowa. The Company then opened a nacelle assembly facility in Hutchinson, Kan. in 2010, which was followed by another blade factory in Tillsonburg, Ontario, Canada in 2011. Siemens also has an R&D facility in Boulder, Colorado, and its Americas Offshore office is located in Boston, Mass.

Siemens has also invested in Wind Power Services, with a state-of-the-art training center in Orlando, as well as locations in Houston, Goldendale, Wash., Woodward, Okla. and Chatham, Ontario, Canada. In total, Siemens employs more than 1,700 employees in its U.S. wind and wind service businesses.

Siemens Wind Power and Renewables is a leading supplier of reliable, environmentally-friendly and cost-efficient renewable energy solutions. Driving down the cost of wind power is our key target as we strive to make renewable energy fully competitive with conventional energy sources.