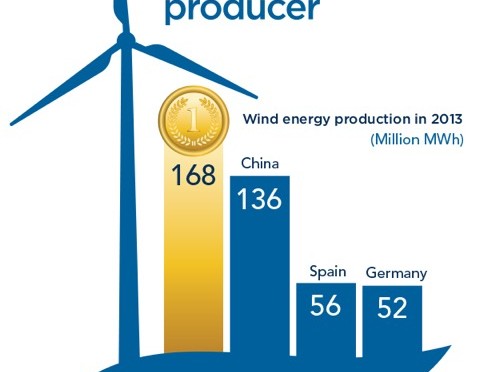 President Barack Obama devoted a portion of his State of the Union address to talking up America’s energy trends, including being a leader in our own energy production.

We’ve covered oil and gas and solar power before, but the wind energy claim was new to us. Is the United States the global leader in producing that, as well, or is Obama just being a blowhard? Let’s get on the grid and find out.

Obama has made renewable power sources a focus of his administration, and has effectively doubled the use of many “clean energy” methods, a large portion of which has been from wind.

The U.S. Energy Department says that the nation’s capacity for generating energy from wind, in which wind moves a turbine to generate electricity to be used on the power grid, has increased from 25,410 megawatts in 2008 to 62,300 megawatts as of September 2014. This capacity growth was fueled in part to a federal production tax credit that expired at the end of 2014. There are still projects being built using the tax credit, so capacity is expected to keep growing.

Many energy reports, however, generally say the United States trails China in its total wind energy capacity. The Global Wind Energy Council said in 2013 that China has the capacity to generate 91,412 megawatts. China also has outpaced the United States for wind-driven power installations.

But that’s where we run into a headwind on the stats, because there’s a difference between capacity (what can be produced) and generation (what actually is produced).

A Jan. 15, 2015, report by the American Wind Energy Association said the electrical energy actually being produced was currently greater in the United States than it was in China, and has been since 2008. The report said in 2013 the United States generated 167 billion kilowatt hours (a measure utility companies use to bill companies; a megawatt equals 1,000 kilowatts), while China generated 138 billion kilowatt hours.

Simon Mahan, renewable energy manager for the pro-renewable Southern Alliance for Clean Energy, said there a many factors in determining the two different measurements, leading to discrepancies depending on how they’re recorded. A wind farm in America may be more efficient than one in China because the wind is better, for example, making more power even if the one in China has more turbines.

The focus on installations is due in part to the fixed capital costs of building a wind farm, and full-year generation data isn’t available if, say, an installation opens in April, Mahan said. He compared capacity and generation to how a hybrid car’s gasoline tank is smaller than a truck’s, but both can go about the same distance because the hybrid is more efficient.

Determining if either country maxes out that capacity depends on factors that can only be predicted and not confirmed, Mahan said, although China has issues with how much its power grid can safely hold at one time. The International Energy Agency has predicted the demand for wind power in China is slowing, while the United States faces “policy uncertainty” that may affect wind power’s future here.

China is actually the leader in the overall capacity for generating wind power. But the United States has overtaken China in terms of the actual amount of electricity wind power it generates.

Both countries plan to continue to expand wind capacity — China more than the United States —  but they also both face challenges to expanding capacity and generation.