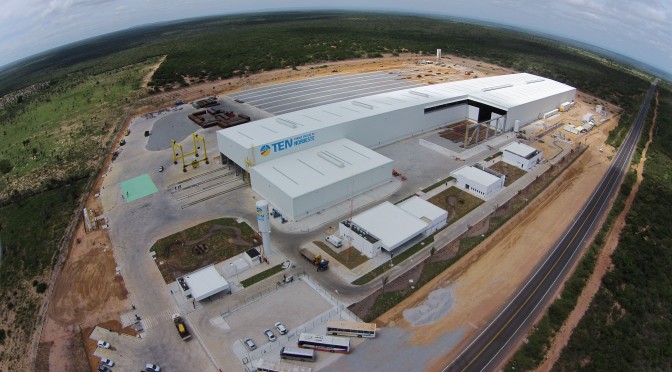 Alstom, global supplier of equipment and solutions for power generation, and Andrade Gutierrez, one of the largest infrastructure groups in Latin America, are inaugurating an industrial joint venture dedicated to the production of steel towers for wind turbines, Torres Eólicas do Nordeste (TEN). The unit is located in Jacobina, Bahia, 350 km from Salvador.

The joint venture, 51% owned by Andrade Gutierrez and 49% by Alstom received investment of around 30 million euros[1] last year. The plant occupies a built-up area of 22,000 sq. meters on a 140,000 sq. meters plot, next to the main current and potential wind projects of the region. It took a year to build the unit and around 400 people were involved in the project.

With capacity to produce 200 metallic towers a year, the sites contributes directly to the region’s economic and social growth by increasing the production chain and generating new jobs. When the plant is fully operational, it will create around 250 direct employees, in addition to 600 indirect ones.

Jacobina unit is Alstom’s third Wind unit in Latin America. The first one was opened in 2011, in Camaçari (Bahia) to manufacture nacelles, and the second one was opened in 2013, in Canoas (Rio Grande do Sul) to manufacture towers for Brazil’s south market and neighboring countries, such as Argentina, Chile and Uruguay.  Alstom has also contributed for the development of the supply chain for nacelles, towers, hubs and blades, positioning itself as a major player in the country.

“Brazil should enter very soon the ranking of the largest wind power producers in the world. So it is particularly gratifying for Alstom to open this new plant in Brazil and contribute to this growth”, says Yves Rannou, Senior Vice President of the Alstom Wind business.

Andrade Gutierrez positions itself as an integrator in the wind industry. The company can manage the countless interfaces of the different services required for the construction of a wind farm, and expanded its activities to build accesses, power and transmission systems, to install wind turbines, and now to product towers. Therefore, the company plans to increase the supply of projects with quality, guaranteed operation schedules and cost reliability.

Alstom has already installed over 3,000 wind turbines in over 200 wind farms around the world, supplying over 5.8 GW of power. The French company designs and manufactures onshore and offshore wind turbines between 1.67 and 6 megawatts, in addition to providing solutions to all geographic and weather conditions.

Grupo Andrade Gutierrez, with its diversified experience built in over 65 years of operation in Brazil and abroad, is proud to actively participate in the economic and social development of the countries where it operates. It is positioned among the largest groups in Brazil and as one of the main infrastructure conglomerates in Latin America. It operates in diversified business fronts, such as Engineering and Construction, Power, Concessions, Telecommunications and Health.

Power: Andrade Gutierrez stands out for its capacity to manage large projects and offer complete solutions in the projects it executes. The Group operates as an integrator and performer of studies in the several sources of power generation, and also offers distinguished logistic solutions for power transmission and distribution projects.

Thermal plants: the company participated in the implementation of several thermal plants, which total over 4,000 MW of installed power (Macaé Merchant (RJ), Norte Fluminense (RJ), Termelétrica de Fortaleza (CE) and Usina Termelétrica de Tubarão (ES)). Highlight for the implementation of thermal-nuclear plants, having participated in the consortium responsible for the assembly of the Angra II Nuclear Plant and executing the civil works for the Angra III Nuclear Plant.

Alstom is a global leader in the world of power generation, power transmission and rail infrastructure and sets the benchmark for innovative and environmentally friendly technologies. Alstom builds the fastest train and the automated metros with greatest capacity in the world, supplies integrated turnkey plants and associated services to a wide range of power sources, including hydro, nuclear, gas, coal and wind, and offers several solutions for power transmission, focused on smart grids. The Group employs 93,000 people in over 100 countries. It registered sales of €20 billion and closed approximately €21.5 billion in orders in 2013/14.