German construction of wind turbines reached a record high in 2014, with 4,750 megawatts – equivalent to the capacity of three nuclear reactors – brought on stream.

Germany now has 24,867 wind turbines in operation on land, part of a globally unprecedented plan to retire all nuclear power generation and limit fossil fuel use in a drive to obtain as much renewable energy as possible.

The federation said an upsurge in construction after changes to planning rules, as well as a rush to claim expiring subsidies, had enabled the industry to beat the record of 3,240 megawatts of new capacity, which was set in 2002. 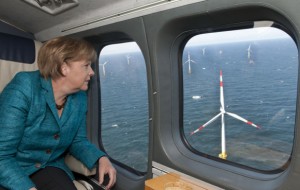 The data does not include energy from turbines in shallow offshore seas, which has been dogged by start-up problems.

Germany is to phase out nuclear power in 2022.

The government’s planning target for new wind turbines last year was just 2,500 megawatts. There have been concerns that wind energy may be expanding too fast, since the existing network of power lines and power storage technology may be unable to cope with power spikes on particularly windy days. 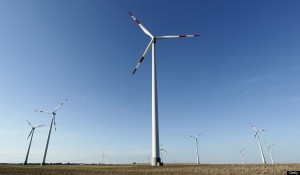 German public opposition to nuclear power and enthusiasm for renewable energy dates back to the 1980s. Public opinion swung decisively against nuclear power after the 2011 partial meltdown of nuclear reactors at Fukushima, Japan.