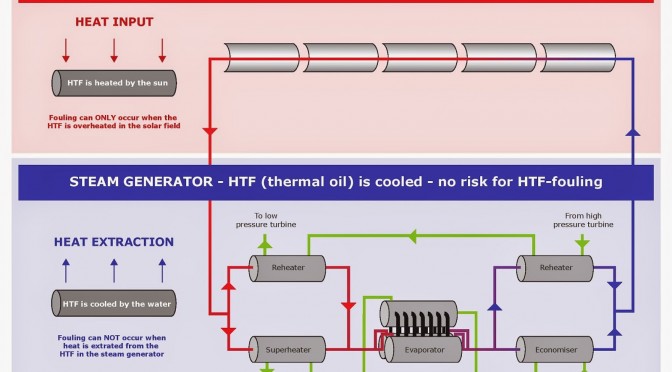 The use of fouling factors is mistakenly requested in concentrated solar power (CSP) steam generator technical specifications, resulting in up to 30% oversized steam generator components, increased material costs and hindered CSP competitiveness as a result.

Aalborg CSP removes the myth of this technical phenomenon and introduces a 5-year guarantee against fouling to encourage the market towards optimized technology development.

Fouling is a layer of an unwanted insulating material generated on the surface of the component. This material can interfere with the component’s performance and efficiency. In a CSP context, fouling can be the result of overheating the heat transfer fluid (eg: thermal oil) in the solar field due to incorrect operational arrangements. The heat transfer fluid (HTF) can therefore crack, creating an undesired coating within the receiver tube and carrying the risk of sending solid particles with the HTF flow to the rest of the CSP plant.

When technical specifications for CSP steam generators are made, a fouling factor is considered in order to avoid any compromise on the component’s performance. This can result in up to 30% extra material in the equipment design and higher costs. Fouling in steam generators designed based on traditional boiler principles (ASME and EN power boiler standards) however is a mistakenly applied factor for two simple reasons:

Secondly, even if solid particles accidentally entered the steam generator it would not be an issue for the header and coil type equipment as they apply large tube diameters and spacing which improves the circulation thereby eliminating the risk of fouling.

“Ever since our first solar steam generators went into operation in 2008, fouling has never been a problem to us. Even if plant operational mistakes were made and dirt appeared in the system, a normal boiler chemical cleaning would be able to solve the issue. Therefore, oversizing components by up to 30% due to a mistakenly identified specification is not reasonable and will only prevent the CSP market from realizing cost optimization in reality,” – said Svante Bundgaard, CEO of Aalborg CSP.

As a dedicated firm to reduce levelized cost of energy (LCOE) of CSP plants, Aalborg CSP launches a new standard in the CSP industry and introduces a 5-year guarantee against fouling for the header- and coil steam generators. This gesture intends to foster the CSP market towards designing technical specifications that encourage optimized technology development instead of following a repeated structure.

Aalborg CSP A/S is a world leader in CSP boiler systems and technologies.

Our globally recognised solutions are based on 25 years of experience with traditional steam boilers uniquely adapted to the CSP industry. We design and deliver steam generation systems, molten salt and steam tower receivers, industrial solar boilers and integrated CSP energy systems that combine heat and electricity production as well as water desalination. Aalborg CSP has supplied to CSP Plants contributing to more than 330MWe worldwide.

Our engineering design is centred on a value-adding concept to perform beyond standard specifications. The Aalborg CSP solutions aim to provide high bankability potential as a benefit of excellent and reliable performance. Our world-class project management expertise ensures delivery reliable on quality, budget and deadline commitments.

Headquartered in Aalborg (Denmark) and with sales & service offices in Spain, US, Kenya, Uganda and Indonesia, Aalborg CSP has realised cost effective thermal energy solutions to a variety of industries worldwide.