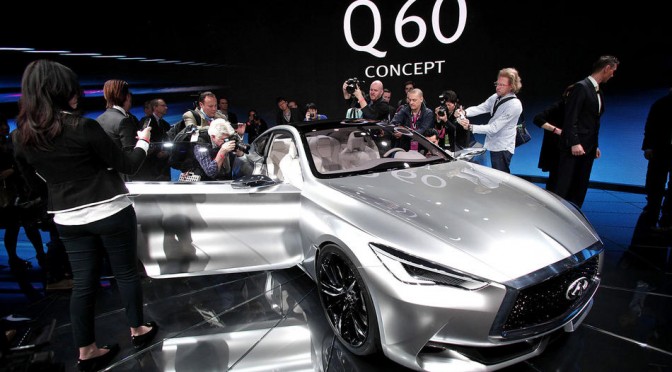 General Motors on Monday showed its Chevrolet Bolt concept car with an electric driving range of more than 300 kilometres and a $30,000 price tag, offering a view into where the U.S. auto maker is pushing in development of electric vehicles.

The all-electric Bolt is a concept car not currently slated for production, but Chief Executive Officer Mary Barra said the company is committed to developing an affordable, long-range EV, and GM said it could develop the car in as little as 18 months.

For years automakers have failed to make an electric car with the two qualities most drivers demand: a long driving range and a low sticker price.

Tesla Motors addressed half of the equation with its Model S, a sport sedan that travels 265 miles on a charge — but costs about $80,000. Other automakers tackled the other half, with electrics that are economical but go only about 80 miles between lengthy charging sessions.

Now General Motors, in a dramatic model debut in Detroit, says it has unlocked the magic formula. Its Chevrolet Bolt concept car will travel 200 miles between charges and sell in the low $30,000 range, after government incentives, GM executives said. The spacious four-door hatchback will go on sale in 2017.

If the automaker can deliver, the Bolt could transform the prospects for widespread adoption of electric cars. The Bolt could be “the first mass-market EV success,” said one industry veteran.

“A 200-mile EV range at about $30,000 in a crossover body shape is a killer combination,” said John Krafcik, president of auto shopping company TrueCar Inc. and former chief executive of Hyundai Motor America. “You are looking at annual sales of 100,000 vehicles.”

The Bolt’s range more than doubles that of Nissan’s Leaf, the bestselling battery electric car, along with similar offerings from most major automakers. The car could help quell widespread skepticism about the future of electric cars, especially during a time of plummeting gas prices.

Tesla has promised a model with a Bolt-like price and range for years. But the automaker’s next offering will be the repeatedly delayed Model X sport utility vehicle, now expected to launch late this year, for about the same price as the Model S. The affordable Model 3 is still years away.

Tesla said it welcomed the Bolt concept, which debuted Monday at the North American International”Tesla is always supportive of other manufacturers who bring compelling electric vehicles to market,” the automaker said in a statement. “We applaud Chevrolet for introducing the Bolt and are excited to learn more about the product.”

The Bolt, which GM kept secret until the Detroit show, made its debut alongside a redesigned 2016 Volt, the second generation of Chevrolet’s pioneering plug-in hybrid, first introduced in 2010. The new Volt will have an electric-only range of 50 miles before a gasoline engine takes over.

The original Volt was criticized for a high price and spotty execution. But GM’s early start on electric development — the company also produced the low-selling subcompact Spark EV — may now pay off in lower production costs.

“You have to wonder what the market will be for super-efficient vehicles at a time when oil is around $50 a barrel,” said Jeremy Anwyl, an auto industry consultant.

Even Toyota, the global leader in gas-electric hybrids, doesn’t see much future in cars powered by batteries alone. Toyota is moving instead into fuel cell cars, which rely on hydrogen to power their electric motors.

GM remains committed to battery power, despite the challenges it has faced. Chevrolet had hoped the original Volt would break through as a mainstream vehicle.

But the first Volt was a pricey and compromised car, said Jake Fisher, director of auto testing at Consumer Reports. The original Volt started at $41,000 for a base model, before incentives of up to $7,500 from the federal government and $2,500 from California.

“It was a really expensive vehicle that didn’t feel expensive,” he said. “Inside, it was basically a Chevy Cruze. And in the end, even the efficiency wasn’t all that great.”

The original Volt could travel 35 miles on battery power. But after the battery ran out, it achieved only 37 mpg operating as a hybrid. (The 2016 Volt will get 41 mpg in hybrid mode.) The current Prius, by comparison, achieves 51 mpg in city driving and offers more comfort and refinement at a substantially lower starting price.

Another big drawback: The Volt offered only four seats, because of space issues created by the large battery.

The Volt succeeded by other measures, however. It has run a neck-and-neck race with the Nissan Leaf for the title of best-selling plug-in car. More important, it has created a loyal group of Volt owners eager to see the company’s next-generation electric models.

Chevrolet did not release pricing on the new Volt, but it isn’t likely to increase much, if at all, from the current model, which starts at about $34,000 before government incentives. Farah said his team focused on giving customers a better car for the money.

“The improvement in range is significant, and miles per gallon is significant, but what really matters is how it feels driving down the road,” he said. “That’s where you hook people.”

The debuts of the Bolt and redesigned Volt affirm the automaker’s long-term commitment to electric vehicles, Reuss said.

“There are a lot of people who don’t make snap decisions based on the current price of gas,” Reuss said. “These are people who care about what they are doing to help the environment for the next generation.”