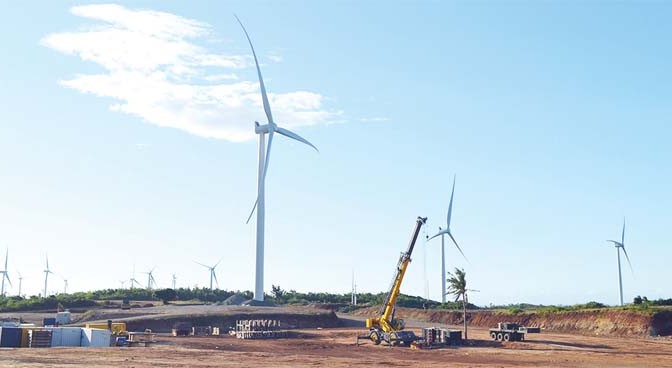 Ilocos Norte has maintained its title as the “home of the largest renewable energy wind farms in Southeast Asia” with two big wind farms successfully opened in the last quarter of the year: the 150 Megawatt (MW) Burgos wind farm project and the 81 MW Caparispisan Wind Energy project in Pagudpud town, bringing a total of 231 MW capacity of renewable energy production.

Thus, the province now has a total of 264 MW capacity of renewable energy production, including the 33MW Bangui Wind Farm constructed in 2005.

These wind turbines of the 81-megawatt (MW) Caparispisan Wind Energy Project is just one of the two alternative energy sources that have been put into operation in Ilocos Norte this year together with the 150-MW Burgos Wind Farm. (Freddie G. Lazaro)

Construction of the two new wind farms was part of the the national government’s efforts in maximizing environment–friendly resources to produce electricity in anticipation of a power crisis in the summer of 2015.

On October 31, 2014; the 150MW Burgos windfarm project (BWP) of the Energy Development Corp. (EDC) was successfully commissioned to operate by the Department of Energy (DOE). The EDC invested $450 million to develop the BWP now operated by EDC Burgos Wind Power Corp.

The BWP has 50 wind turbines operating in a 600-hectare forest land covering Barangays Saoit, Poblacion and Nagsurot, all in Burgos, Ilocos Norte. The BWP, the largest wind farm in Southeast Asia, is expected to produce an estimated 233 gigawatt-hours (GWh) of energy annually; it will service over a million households.

The BWP will help boost the needed power capacity in the Luzon’s grid in the next 10 years, to meet an expected 4.5-percent annual hike in electricity demand.

According to Richard Tantoco, president and chief operating officer of EDC,  the BWP developer was the first company to avail of the feed-in tariff (FIT) granted by the national government guaranteeing the firm a cost-based compensation of R8.53 fixed rate per kilowatt-hour.

The Renewable Energy Act of 2008 (Republic Act No. 9513), among other things, prioritizes connections to the grid for electricity generated from emerging renewable energy resources, and the purchase and transmission of and payment for such electricity by the grid system operators.

The 81MW Caparispisan Wind Energy, which was developed by the Northern Luzon Renewable Energy Corporation (NLREC), was formally inaugurated on November 19, 2014 in a simple rites in Barangay Caparispisan, Pagudpud town. It has 27 units of wind turbines installed atop the hill in the 625-hectare land area.

The wind farm was commissioned in the wake of pending of protest of several residents in Barangays Malasin, Abaca and Dadaur, all in Bangui, Ilocos Norte, concerning the “right of way” of its installed transmission lines to the grid.

“The NLREC constructed the 69-km transmission line over properties belonging to at least 10 families living in three barangays even without permission, negotiation, and payment to the property owners, l probably a violation to the constitutional rights of the ordinary citizens,” said lawyer Golda Arquillo, legal counsel of the complainants-residents.

John Eric Francia, president of the AC Energy Holdings Inc. said the complaint will go through the legal process and was optimistic about of the speedy resolution of the matter, adding that  his company is eyeing the expansion of the project to produce at least 150MW capacity by 2015.

Senator Ferdinand “Bongbong” Marcos, who initiated the construction of the first in Southeast Asia’s 33MW Bangui Wind Farm while he was governor of Ilocos Norte,  claimed these three big renewable energy wind farms in his home province are not just environmentally-sound but a cost effective way of helping ease the enormous burden the Philippines faces in its power requirements as an emerging economy.