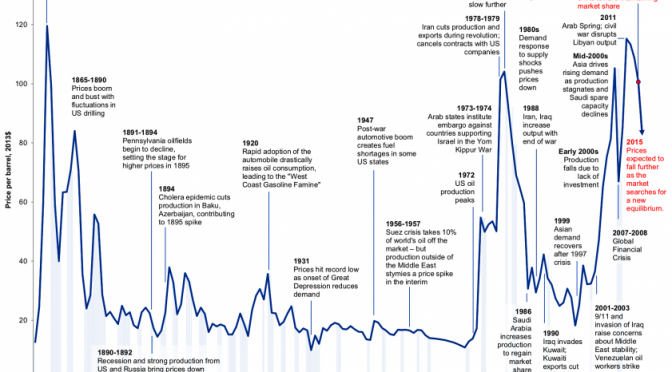 Renewable-energy companies have made tremendous strides in reducing costs and growing markets.

So what the Fed does on interest rates next year is crucial.

The longer low inflation stays the Fed’s hand, the more time the renewable industry has to funnel cheap capital toward its next breakthrough.

Oil’s volatility upward makes consuming nations want to diversify away from it.

This latest instance going the other way may, perversely, help that process.

Cheaper oil, might it also undermine renewable energy? Investors seem to think so: The WilderHill Clean Energy index has been sliding since September and is now decidedly negative for the year. Superficially, this makes sense, as cheaper fossil fuels tend to discourage efforts to use more renewable energy.

Yet oil’s impact on the renewables sector is more complex. Falling prices could actually prove helpful to the likes of Tesla Motor and SolarCity by affecting one important variable: the Federal Reserve.

Oil doesn’t directly compete with solar power and wind energy in the developed world, particularly in the US, where less than 0.5 per cent of electricity is generated from oil. The bigger competitor is natural gas — also cheap as a result of fracking — where prices move independently of oil.

Tesla and other electric vehicle makers are more exposed to oil as they compete against the internal-combustion engine. This matters little while Tesla is still a luxury car maker, but dents hopes of electric vehicles becoming mass-market.

Internationally, oil has a closer but still complex bearing on renewable power’s prospects. The natural gas used to produce electricity in Europe and Asia is often priced off oil, so it is now more competitive. That weighs on the potential for US gas exports, keeping gas cheaper for longer in the US — and maintaining its competitive edge against renewable power.

Moreover, in regions such as Asia, oil still accounts for about 10 per cent of electricity generation. At $US115 a barrel, oil-fired power costs US19c a kilowatt-hour compared with about US10c for solar in sunny, developing markets. At $US75 a barrel, the cost of oil-fired electricity drops to US12.5c — still more expensive, but the benefits of solar are reduced.

Against that, several developing countries, such as India, are using the fall in the price of oil as cover to reduce fuel subsidies. So as oil prices rise again, the impact is likely to be felt more sharply in those countries, boosting renewable energy’s attractiveness.

Low-cost funding helps consumers afford the upfront investment often required to switch to technologies such as solar. After all, SolarCity’s great innovation hasn’t been in panels but in financing, such as selling low-yielding securities backed by lease payments on solar systems.