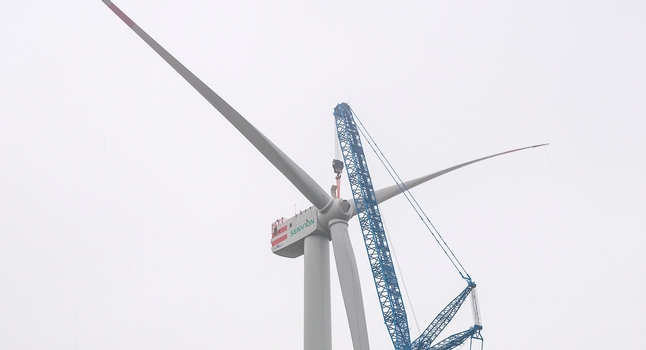 Senvion SE, a wholly-owned subsidiary of Suzlon, the world’s fifth largest* manufacturer of wind turbines, erected the prototype of the Senvion 6.2M152 with the largest rotor diameter in the product range on 3 December 2014.

With a diameter of 152 metres, the swept area is larger than three football pitches.

Russell Stoddart, CTO of Senvion SE, is delighted: “With the Senvion 6.2M152, we are setting standards in the cost-effective generation of offshore wind energy. Thanks to the larger rotor diameter compared to the Senvion 6.2M126 (126 metres), the energy yield at wind speeds of 9.5 m/s is increased by up to 20 per cent. We will further consolidate our strong position in the offshore wind-energy market with this turbine.”

With a rated power of 6.15 megawatts, the 6.2M152 can supply around 4,000 homes with electricity. The nacelle alone is as big as two detached houses and will be constructed offshore at a hub height of between 97 and 100 metres.

The Hamburg-based company has already sold the prototype of the Senvion 6.2M152. In conjunction with the customer EWE ERNEUERBARE ENERGIEN GmbH, commissioning is scheduled to be completed by the end of 2014. The Senvion 6.2M152 could enter serial production in 2015. With its 6.2M126, the company already manufactures the largest commercial turbine for offshore projects. Since introducing its multi-megawatt offshore turbines ten years ago, Senvion has already installed more than 130 turbines of this platform offshore.