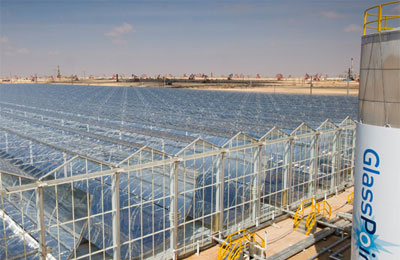 GlassPoint is the leading provider of solar steam generators to the oil and gas industry for applications such as Enhanced Oil Recovery (EOR).

GlassPoint is the leading provider of solar steam generators to the oil and gas industry for applications such as Enhanced Oil Recovery (EOR).

GlassPoint Solar, the leader in solar Enhanced Oil Recovery (EOR), is set to showcase its innovative solar steam generation technology to local and international oil operators, executives and government officials at the SPE Heavy Oil Conference and Exhibition taking place from 8-10 December 2014 in Kuwait. GlassPoint will demonstrate how its solar EOR systems can empower oil producers throughout the Gulf region with an economical alternative to using natural gas in heavy oil production.

Thermal EOR deployment is growing in Kuwait and around the world to boost production of heavy oil, which represents more than 70 per cent of today’s remaining oil reserves worldwide. The leading method of producing heavy oil is steam flooding, a type of thermal EOR that injects steam into a reservoir to heat the oil making it easier to pump to the surface. Steam is typically produced by burning large volumes of natural gas, a scarce and valuable resource throughout the Gulf region. GlassPoint’s solar EOR technology uses the sun’s energy to generate steam, reducing EOR gas consumption by up to 80 per cent.

Rod MacGregor, CEO and President of GlassPoint Solar, said, “Heavy oil production is an integral part of achieving Kuwait’s 2020 and 2030 strategies. Planned thermal EOR projects in North and West Kuwait stand to be some of the largest steam flooding projects in the world and will require burning significant amounts of imported natural gas or costly fuel oil. By deploying GlassPoint solar steam generators to extract Kuwait’s heavy oil reserves, the country can reduce its reliance on imported energy.”

Hussain Shehab, GlassPoint’s Kuwait Country Chairman and long-time Kuwait Oil Company veteran, added, “GlassPoint’s technology has already been proven as a viable solution for producing steam in desert oilfields to save gas. Using solar EOR will help Kuwait reach its heavy oil production targets without compromising other gas dependent industries. The decision made today on fuel choice and the integration of solar will effect the next 100 years of production and have profound effects on the country. Solar EOR is a strategic decision for the oil and gas industry, for Kuwait’s economy, for the environment and its people.”

Shehab explained that Kuwait is just beginning its thermal EOR developments. The country has been importing gas for years, which means securing the gas for steam may cost up to $13 per MMBtu. Using fuel oil or diesel could be even more expensive, in addition to reducing Kuwait’s export revenue and contributing to poor air quality. Solar steam could supply the majority of Kuwait’s thermal EOR needs at half the cost of these fuel alternatives.

Unlike solar panels that generate electricity, GlassPoint designed a concentrating solar power (CSP) technology specifically to meet the needs of the oil and gas industry. Its enclosed trough technology uses large, curved mirrors to focus sunlight onto a boiler tube containing water. The concentrated energy boils the water to produce the steam, which is feed to the field’s existing steam distribution network. The system is enclosed within a glasshouse structure to protect the solar collectors from wind, sand and dust storms that are becoming increasingly common in Kuwait year round. An automated washing system cleans the glasshouse each night to maintain performance in the desert environment, reducing water use and manual cleaning costs.

By enclosing the system indoors, GlassPoint is able to use lightweight materials to significantly reduce the costs compared to older solar technologies. GlassPoint steam generators are fully automated using many of the same components, pumps and controls deployed in oilfields worldwide today for seamless integration. It also accepts the same brackish feed-water as fuel-fired steam generators and produces the exact same steam quality.

GlassPoint’s first project in the Middle East has been operating successfully in the Sultanate of Oman since late 2012. Petroleum Development Oman (PDO), the Sultanate’s largest oil and gas producer, partnered with GlassPoint to build a 7MWth system that was completed safely on time and on budget. The solar system generates an average of 50 tons of emissions-free steam per day, which is feed to existing thermal EOR operations at PDO’s Amal West oilfield. The project, which continues to exceed contracted performance targets, serves as an operational baseline for large-scale projects throughout the region.

Kuwait, with its abundant heavy oil reserves, represents one of the largest markets for solar EOR deployment worldwide. Earlier this year, GlassPoint opened a local office in Kuwait and appointed Shehab to better serve the country’s thermal EOR needs. Shehab, who previously served as the Deputy Managing Director at Kuwait Oil Company, oversaw West Kuwait, including the initial steam injection pilot at the Wafra field in partnership with Chevron Saudi Arabia.

MacGregor will be discussing how solar EOR can be applied in Kuwait to help reach its national production goals and reduce reliance on LNG imports at the conference’s plenary panel session, “Heavy Oil: the Cutting Edge of New Technology and Bridging the Gap.”

GlassPoint is the leading provider of solar steam generators to the oil and gas industry for applications such as Enhanced Oil Recovery (EOR). Oil operators worldwide deploy EOR to boost well productivity by up to 300 percent. By replacing gas-fired steam generation with solar, GlassPoint can reduce EOR gas consumption by up to 80 percent. The gas saved can be redirected to higher value uses such as LNG export, industrial development and power generation. GlassPoint’s projects operate in global markets ranging from the Middle East to California.