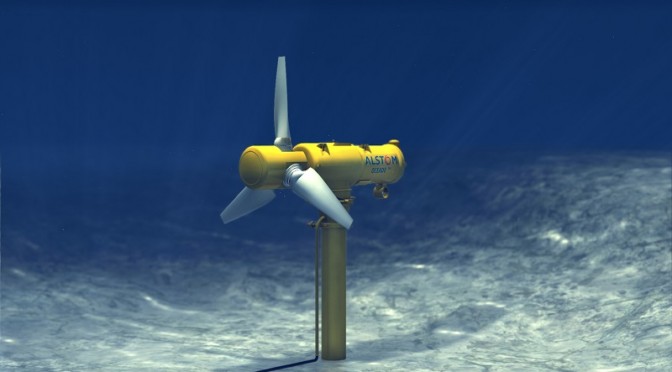 Together with GDF SUEZ, Alstom has been chosen by the ADEME to equip a tidal pilot  farm at the raz Blanchard, on the western part of the Cotentin peninsula (Manche department, France), as part of a Call for Expression of Interest (CEI) issued by the French Government in September 2013.

Four Oceade™18 – 1.4MW tidal turbines, as well as an Alstom electrical subsea hub  will be installed at this high-potential tidal site. With 5.6 MW in total capacity, the tidal turbines will be able to supply power to 15,000 people.

The sea-based project is slated to begin in 2017 and is expected to operate for a period of 20 years.

This project will allow Alstom to test its Oceade™ 18 – 1.4MW tidal turbine under installation and operational conditions similar to those in commercial facilities. A 500kW prototype has already been tested at the EMEC2  in 2011/2012, producing 250 MWh of electric power for the network. It was then replaced with a 1MW turbine in January 20133  which has produced over 750 MWh of electric power for the network, amounting to a cumulative total in excess of 1 GWh from both prototypes. Alstom’s Oceade™ tidal turbines, due to equip the GDF Suez pilot farm at Raz Blanchard, will thus enjoy the benefit of this feedback from two separate sources and of any improvements stemming from it.

Installing the Oceade™ 18 – 1.4 MW turbine at the raz Blanchard GDF SUEZ pilot farm represents a decisive step towards setting up commercial operations in tidal energy. A fully integrated team of 80 Alstom engineers devoted to tidal energy in Nantes and Bristol, has been focused on the development of the Oceade™ system, so as to cut down on the cost of electric power and to maximise the use of tidal resources according to the various local conditions (the velocity of the currents, the depth).

“Thanks to this project, Alstom technology will be in a position to demonstrate its efficiency, its optimised costs and its maintainability, a necessary prerequisite to considering any future move towards a commercial phase on a larger scale,” said Jacques Jamart, Alstom Senior Vice-President in charge of new energies.

Alstom is continuing to develop the largest portfolio of solutions in the field of renewable energies. The company offers the most complete range of products and integrated systems to generate electricity from hydraulic, onshore and offshore wind, geothermal, biomass and solar sources.

[1] The electrical subsea hub is developed by Alstom in cooperation with GDF SUEZ as part of the PRISMER project, which won an earlier CEI organised by Ademe on Marine Energy technological bricks

[2] European Marine Energy Centre, a test site located off the coast of the Orkney Islands in Scotland

[3] As part of the ReDapt Project (Reliable Data Acquisition Platform for Tidal), which is commissioned and co funded by the ETI (Energy Technologies Institute).