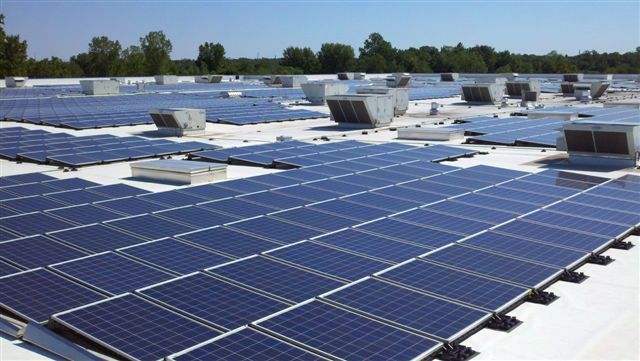 IKEA, the world’s leading home furnishings retailer, today announced plans to increase the solar array atop its Detroit-area store that opened eight years ago in Canton, MI. In September, IKEA began work on a 44,000-square-foot expansion to the store, atop which new panels will be installed beginning Spring 2015, with a completion by Summer.

The 40,000-square-foot solar addition will consist of a 240.9-kW system built with 765 panels, and will produce 287,490 kWh more of electricity annually for the store. Including the existing system, IKEA Canton’s total 1,218.5-kW solar installation of 4,925 panels will generate 1,426,490 kWh of clean electricity yearly, the equivalent of reducing 984 tons of carbon dioxide (CO2), eliminating the emissions of 207 cars or powering 135 homes (calculating clean energy equivalents at www.epa.gov/cleanenergy/energy-resources/calculator.html).

“We are thrilled at the opportunity to increase the amount of solar energy generated and used by this store,” said Matt Hunsicker, IKEA Canton store manager. “This is another example of the IKEA commitment to create a more sustainable life for communities where we operate.”

Expanding this array contributes to the IKEA solar presence of nearly 90% of its U.S. locations with a total generation goal of 40 MW. IKEA owns and operates each of its solar PV energy systems atop its buildings – as opposed to a solar lease or PPA (power purchase agreement) – and globally has allocated $1.8 billion to invest in renewable energy through 2015, reinforcing its confidence and investment in solar photovoltaic technology. Consistent with the goal of being energy independent by 2020, IKEA has installed more than 700,000 solar panels on buildings across the world and owns approximately 157 wind turbines in Europe and Canada, with 104 more being built in the U.S. Other IKEA arrays have been expanded too.

Located on approximately 30 acres along Ford Road off I-275 at Haggerty Road, the 311,000-square-foot IKEA Canton opened in June 2006. In addition to 10,000 exclusively designed items, the store presents 52 different room-settings, three model home interiors, a supervised children’s play area, and a 350-seat restaurant serving Swedish specialties, as well as American dishes. Other family-friendly features include a Children’s IKEA area in the Showroom, baby care rooms, play areas throughout the store, and preferred parking. Also, IKEA installed Michigan’s largest solar array atop the roof of the store in 2012.

Since its 1943 founding in Sweden, IKEA has offered home furnishings of good design and function at low prices so the majority of people can afford them. There are currently more than 360 IKEA stores in 46 countries, including 40 in the U.S. IKEA incorporates sustainability into day-to-day business and supports initiatives that benefit children and the environment.