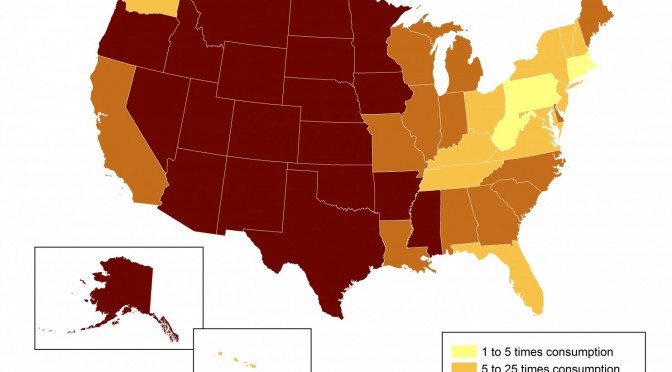 In a new report, the Environment America Research and Policy Center seeks to visualize and quantify this potential as it pertains to the United States.

The report argues that the U.S. “has the potential to produce more than 100 times as much electricity from solar PV and concentrating solar power (CSP) installations as the nation consumes each year.”

The map above, notes the report, was created by comparing technical estimates of solar potential from the National Renewable Energy Laboratory with state level electricity sales data from the Energy Information Administration.

The report also suggests that 35 million homes and businesses could potentially install solar on their roofs:

Here again, the map is based on data from the National Renewable Energy Laboratory, which laid out the percentage of potential rooftops that could host solar panels in various climates.

Granted, it is not that all of this solar potential will necessarily ever be exploited. But then again, we only need to exploit some of it. “It’s technically achievable, and we only have to capture a fraction of it, one hundredth of it to get all of our current electricity needs,” says Environment America’s energy program director Rob Sargent.