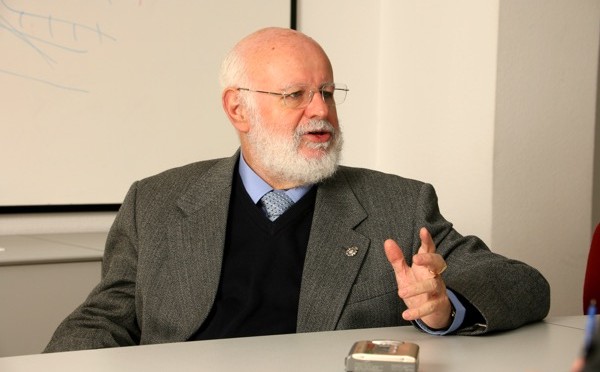 Antonio Luque, professor and director of the Institute of Solar Energy at the Technical University of Madrid, Spain, will receive the Karl W.  B?er Solar Energy Medal of Merit at a ceremony to be held at the University of Delaware on March 13, 2015.

The medal and a cash award of $60,000, funded by the Karl W. B?er Solar Energy Medal of Merit Trust, is bestowed every two years to an individual of great distinction who through research, development, application, economic enterprise or policies has made extraordinary contributions to the fields of solar energy, wind energy or other forms of renewable energy, which have been recognized nationally and internationally.

The award is given in honor of Karl W. B?er, a longtime University of Delaware faculty member, founder of UD’s Institute of Energy Conversion and a distinguished scientist in the field of solar cells.

The award recipient is chosen by a selection committee composed of scientists and presidents of several solar energy-related professional societies, a representative from the U.S. Department of Energy, a past recipient of the award and a member of the B?er family.

“Prof. Luque is an extraordinary scholar who has made exceptional contributions to the field of solar energy,” said Michael T.  Klein, the Dan Rich Chair of Energy in UD’s Department of Chemical and Biomolecular Engineering and executive director of the Karl W. B?er Solar Energy Medal of Merit Trust. “His selection for the B?er award is a fitting testimonial to the impact his work has had on the science and technology of renewable energy. The selection committee is proud and excited to make this announcement.”

Among his many accomplishments, Luque is the inventor of the intermediate band solar cell, which raises the efficiency limit from 41 percent to 63 percent.

In 1969, he founded the Semiconductors Laboratory at the Universidad Politécnica de Madrid (UPM). In 1979, he proposed to the authorities and obtained approval to convert the laboratory into the Instituto de Energía Solar (IES), a highly recognized center in photovoltaic research.

In 1976, Luque invented the bifacial silicon solar cell, which is active on both sides and is able to collect both direct light and reflected light as high as 50 percent of the light on the front face, leading to cells with very high practical efficiency.

To fabricate the bifacial silicon solar cell, Luque founded the firm Isofotón and became its first chairman of the board until 1990. He stimulated the adoption in Spain of a generous feed-in tariff. It was first announced in 2000 by the prime minister at the inauguration of a photovoltaic canopy that Luque had installed in his residence. In 2008, 2.6 gigawatts were installed in Spain, producing as much energy as a medium-size (500 megawatts) nuclear plant.

Luque’s numerous academic and professional honors include the SolarWorld Senior Einstein Award by SolarWorld AG in 2008; IEEE’s William Cherry Award for Photovoltaic Science and Technology in 2006; the Juan de la Cierva National Prize for Technology Transfer in 2003; the Rey Jaime I Prize for Environmental Research from the Regional Government of Valencia in 1999; the Alexandre-Edmond Becquerel Prize for Outstanding Contributions to the Development of Photovoltaic Solar Energy in 1992; and the Leonardo Torres Quevedo National Prize for Technology Research in 1987. Luque was elected the founding member of the Royal Academy of Engineering of Spain in 1995.