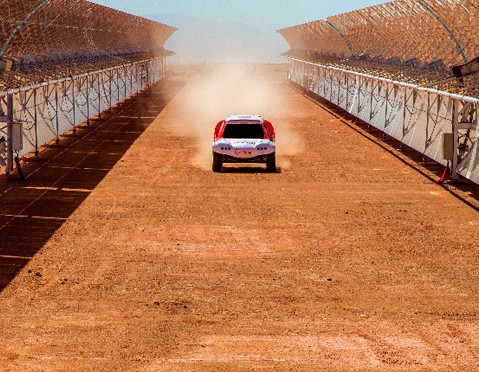 The vehicle was officially presented today at ACCIONA S.A. head office in Madrid as further evidence of ACCIONA’s commitment to innovation, renewable energy and sustainable development.

Developing ACCIONA 100% EcoPowered has taken more than two years of R&D and has counted on the collaboration of a multidisciplinary team of over 20 people.

The purpose was to reach an optimal balance between electric propulsion technology, powered entirely by batteries, and the unique characteristics of a racing car prepared for an extreme adventure such as the Dakar.

ACCIONA 100% EcoPowered is yet another demonstration of ACCIONA’s commitment to the development of renewable energies and its reliability in even the most extreme conditions.

It will be the first time in its 37-year history that Dakar registers a 100% electric car. Dakar is considered the toughest test in the world for a car, with a distance of over 9,000 km and where the average consumption expenditure per participant is 2,250 litres of fuel; and ACCIONA 100% EcoPowered will not emit a single CO2 particle.

The race takes place between the 4th and 17th of January in Argentina, Bolivia and Chile, where ACCIONA is present with Energy and Infrastructure, and Water divisions.