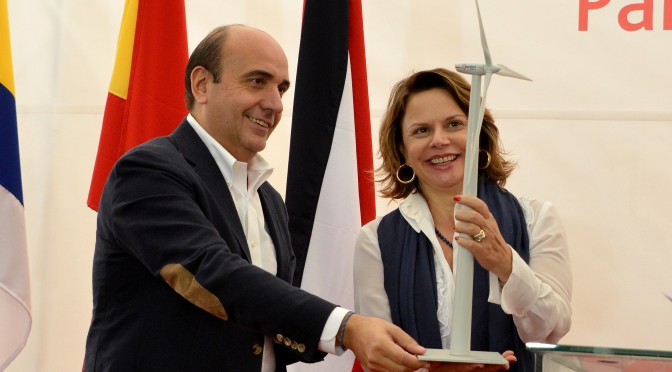 The ceremony was attended by ACCIONA Energía CEO Rafael Mateo, the Spanish Ambassador to Costa Rica, Jesús Rodríguez-Andía, Grupo Ecoenergía directors Salomon Lechtman and Samuel Viroslav, the Mayor of Tilarán, Jovel Arias, and representatives of the ICE (Instituto Costarricense de Electricidad), among others.

In her speech, the vice-president said that Costa Rica has to increase its efforts to generate more energy from clean technologies and added that “investing in renewables is important because it makes our country more competitive”.

For its part, Rafael Mateo stated that investing in Costa Rica has been a very satisfactory experience and expressed his hope that this ACCIONA Energy’s first milestone in the country is continued in the future.

The Chiripa wind farm, representing an investment of 125 million US dollars, entered commercial service in July this year. The electricity it generates will be sold to the ICE under a 20-year contract.

The facility consists of thirty-three AW 77/1500 wind turbines of ACCIONA Windpower technology, with a unit capacity of 1.5 MW and a rotor diameter of 77 meters. The rotors are mounted on 80-meter-high steel towers.

The wind farm is located on a site with a good wind resource, which will enable it to generate more than 200 million kilowatt-hours (kWh) per year. This level of production is equivalent to the consumption of 80,000 homes and will avoid the emission of around 192,000 metric tons of C02 to the atmosphere from coal-fired power stations.

Coinciding with the construction of the wind farm, the ACCIONA-ECOENERGIA consortium has implemented a social management program, consisting of incentives for companies contracting local employees and a series of measures to cover the needs of the communities located near the site.