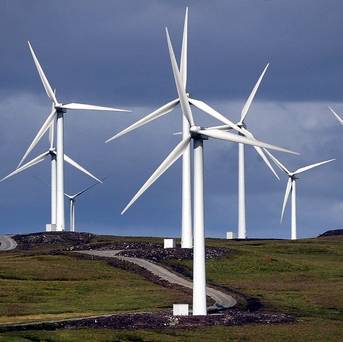 The Dunbeg Wind Farm is one of the biggest such schemes in Ireland, and has the capacity to generate 42 megawatts of power.

It is expected to generate enough electricity each year to power the equivalent of 24,000 homes.

The Dunbeg scheme is Gaelectric’s second windfarm in Northern Ireland.

The company, whose chief executive is Brendan McGrath, pictured above, is pushing through a programme to construct and commission and portfolio of 164 megawatts of generation capacity by 2017.

In the last three years it has secured planning permission for nine Northern Ireland wind farms.

It constructed its first windfarm in the Republic of Ireland in 2011, but had acquired energy production assets on the island a number of years prior to that. Established a decade ago, Gaelectric also has a large land bank in the United States where it also intends to build large-scale wind farms.