The project is financed by Chinese state-owned bank. It is pertinent to mention here that Sindh had a great potential in the field of wind energy and up to now 50,000MW as been identified in the Jhimpir Gharo Wind Corridor.

More than 40 companies are actively engaged in the province to develop 3000 MW power through wind.Sindh government has allotted 680 acres of land to Sachal Energy (Pvt) Ltd for a period of 30 years to establish 49.5MW wind energy project, at a cost of $133 million, at Jhimpir in district Thatta. 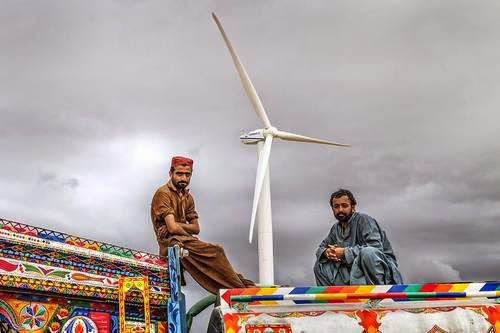 A document in this regard was signed by Shafqat Shah on behalf of Alternate Energy Board and Kashif Ansari, representing M/s Sachal Energy during a land allotment ceremony, held here Wednesday, under which Sachal Energy has awarded the EPC contract to M/s Hyro China Xichi, a Chinese company engaged in Wind Power Development.
The ceremony among others was also attended by Sindh Secretary for Energy, Agha Wasif and AEB Director, Mehfooz Qazi.
The project is included among one of the top priority project initiated under Pakistan China Economic Corridor, last year, with major financing done by the Industrial and Commercial Bank of China (ICBC).
Under the agreement the project will be completed in 18 month’s time following which the company would substantially contribute to the national grid of power for next 30 years, that is till 2044.