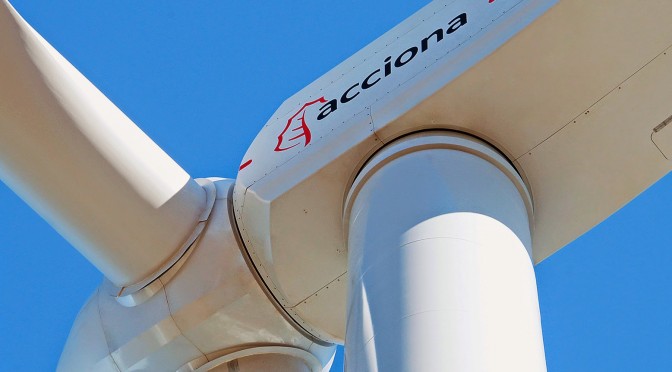 Results boosted by €63 million in capital gains from asset sales.

Earnings Before Tax would have been €283 million higher if it weren’t for the energy reforms introduced in Spain since late 2012.

ACCIONA’s attributable net profit almost doubled to €149 million in the first nine months of 2014, an increase of 98.5%, thanks to capital gains of €63 million from asset sales, and the impact of lengthening the useful life of wind farm assets, resulting in lower amortisation costs, valued at €92 million.

Net financial debt on September 30th 2014 was €5,921 million, down 2% compared with the end of 2013. Exchange rate movements and the marking to market of derivatives brought about a €196 million increase in net debt during the period. Without these two negative impacts, net debt would have fallen by 5.2% since the end of December 2013.

Cash generation of €503 million from operating activities helped fund net ordinary capital expenditures of €320 million, which represented an increase of 19.6% year-on-year, and was mainly channelled to the Energy division’s international projects.

The results reflect the impact of regulatory changes to the energy sector in Spain, which cut earnings before tax by €194 million in the first nine months of the year. They also reflect a net fall of installed capacity of 59MW from the sale of wind farms in Germany and South Korea, which were partially compensated by the entry into production of 153MW in the past twelve months (58MW of solar in South Africa, 45MW of wind energy in Chile and 50MW of wind energy in Costa Rica.)

The turnaround of “industrial and development” activities is also worth highlighting, with an EBITDA net improvement of €50 million, spearheaded by ACCIONA Windpower, which generated a positive EBITDA of €15 million in the first nine months of the year, compared with losses of €34 million in the same period of 2013.

The new Infrastructure division, which incorporates Construction, Water and Services, posted revenues of €2,736 million in the first nine months of the year, down 2.6% on the same period in 2013.

Construction revenues fell 5.8% to €1,884 million as a result of lower activity in Spain. However, EBITDA rose 0.9% to €88 million and margins improved to 4.7%, from 4.3% a year ago, thanks to an improvement in international projects.  The construction backlog totalled €6,312 million at the end of September, an 11.1% increase since the start of the year, and 65% of the backlog was international, compared with 54% at the end of 2013.

During the first nine months of 2014, the infrastructure business won €2,445 million in new projects, of which 87% were international. The first stage of the East West Link in Melbourne (Australia), awarded in the third quarter, deserves special mention.

Revenues at the Water unit totalled €329 million in the first nine months of 2014, down 5.2% compared with the same period of 2013, mainly as a result of lower activity in design and construction.  The Water unit’s backlog €9,729 million at the end of September 2014.

The Services unit’s revenues rose 12.9% to €523 million, with EBITDA 21.1% higher at €21 million. The unit – which groups airport handling services, facility services, logistics, environmental services and others – has benefitted from the growth in facility services.

Other Activities, which includes Trasmediterranea, Real Estate, Bestinver (fund manager) and Wineries, saw a 15.4% increase in revenues to €547 million, and 63.1% growth in EBITDA to €102 million.

Trasmediterranea doubled EBITDA to €30 million as a result of lower fuel costs and higher average prices for passengers and vehicles. The Real Estate unit posted an EBITDA of €4 million in the first nine months of the year, driven by international sales, mainly in Mexico. The unit had a negative EBITDA of €2 million in the same period of 2013.

Bestinver had €8,031 million in assets under management at the end of September.