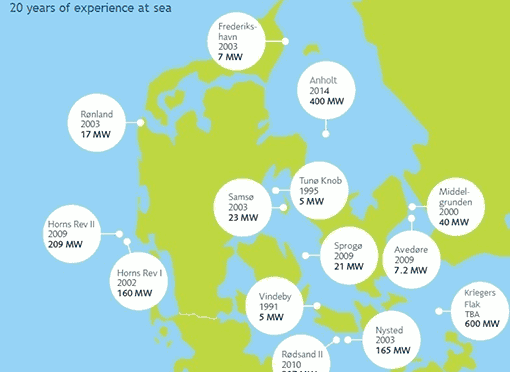 The country is now the second largest nation globally in terms of offshore wind power.

Extensive government support and wind turbine technology modernization will assist the continued growth of Denmark’s cumulative offshore wind power installed capacity, from 1.27 Gigawatts (GW) in 2013 to 2.24 GW by 2020, according to research and consulting firm GlobalData.

The company’s report* states that Denmark, excluding Greenland, is one of the leading wind power markets in the world. The country’s cumulative offshore installed capacity witnessed an increase from 0.42 GW in 2006 to 1.27 GW in 2013, at an impressive Compound Annual Growth Rate (CAGR) of 17%.

“Denmark has set targets for wind power to account for 50% of its power generation by 2020, and for developing 1.5 GW of new offshore capacity by the end of the same year. As a result, the government is increasingly supporting its offshore wind sector to help achieve these goals.”

Singh continues: “Denmark’s offshore wind turbine installations increased from 2009 to 2013, with annual investment more than doubling from $646.4 million to $1.4 billion during the same period. Although no investment is expected for 2014 and 2015, this will improve again and fluctuate between 2016 and 2019, before reaching approximately $1.5 billion by 2020.

“With around thirteen major developments currently active, Denmark already has a well-established offshore wind industry. A number of upcoming projects due to be completed by the end of the forecast period will also help the country to meet its ambitious targets.”