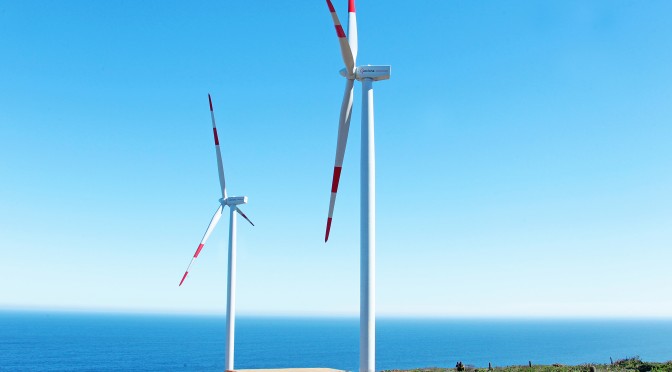 The wind farm is the company’s first in the country and will produce clean energy equivalent to the consumption of more than 60,000 Chilean households every year.

The entry into service of the facility, which has a total capacity of 45 MW, completes a process begun in June 2013 when the utility company Colbún awarded ACCIONA a long-term supply contract (12 years, extendable for another five if the customer wishes) under a tender called for the purchase of energy and attributes associated to energy-efficient projects involving Non-Conventional Renewable Energies (NCRE).

The construction work on the wind farm, located at Canela in the region of Coquimbo, began in November 2013 and has been completed with the start-up of the facility in less than a year.

Electricity production from the wind farm – around 124 kilowatt-hours per annum – is injected into the Chilean Central Interconnected Grid (SIC).

“The start-up of Punta Palmeras symbolizes our vocation to contribute to the development of renewables in Chile, and highlights the professional skills of ACCIONA in the materialization, on time and with guarantees, of large-scale and innovative projects in clean technologies”, declared ACCIONA Energía CEO Rafael Mateo.

The Punta Palmeras facility consists of fifteen AW 116/3000 wind turbines of 3 MW nominal power each, mounted on 92-meter-high steel towers. This model, designed and manufactured by ACCIONA Windpower, has a rotor diameter of 116 meters and sweeps an area of 10,562 m2. It optimizes the capture of energy at sites with medium wind speeds (class IEC IIa), reducing the cost of energy for the developer considerably.

Production from the wind farm will avoid the emission of 119,000 metric tons of CO2 from conventional thermal power stations per year, as well as the import of around 215,000 barrels of oil to generate the same level of power.

In Punta Palmeras ACCIONA has applied the environmental conservation methodology that characterizes all its projects. Specifically in this case, thousands of cacti and bromeliad plants (typical of semi-arid vegetation) have been relocated; indigenous plants have been grown in greenhouses for later replanting in land affected by the building work, and a program of relocating small mammals, amphibians and reptiles from the surrounding area has been carried out.

Other ACCIONA projects in Chile

ACCIONA Energía has other wind power initiatives in the country, plus an extensive portfolio of solar power projects, either for itself or for customers. The company was recently awarded the construction of a photovoltaic plant in Chile, owned by E-CL (GDF Suez Group).

In addition to its work in the energy field, the ACCIONA Group has been in present in Chile for over 20 years, carrying out major projects in infrastructures and water management. It currently operates the highway concession for Route 160 in the south of the country, is constructing the first desalination plant in the Atacama desert for the mining sector (valley of Copiapó) and has built four wastewater treatment plants.