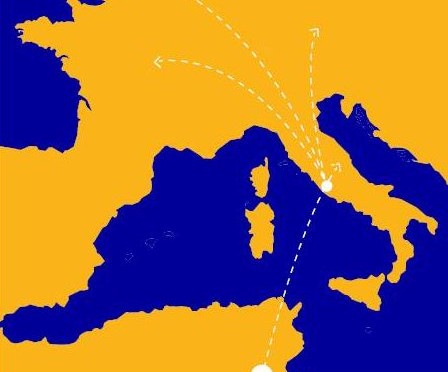 The TuNur project aims to bring two gigawatts of concentrated solar power to the UK from Tunisia if the company wins a contract for difference (CFD) from the British government.

The TuNur project aims to bring two gigawatts of concentrated solar power to the UK from Tunisia if the company wins a contract for difference (CFD) from the British government.

Investors are seeking funding from the UK government for an ambitious plan to import solar energy generated in North Africa. Under the scheme, up to 2.5 million UK homes could be powered by Tunisian sunshine by 2018.

The company involved says they have already spent 10 million euros developing the site. A number of overseas energy producers are competing to bring green energy to the UK from 2017.

Under new rules published by the Department for Energy and Climate Change (Decc) in the Summer, the government will allow developers of renewable energy projects that are not based in the UK to bid for contracts that guarantee subsidies to supply power. 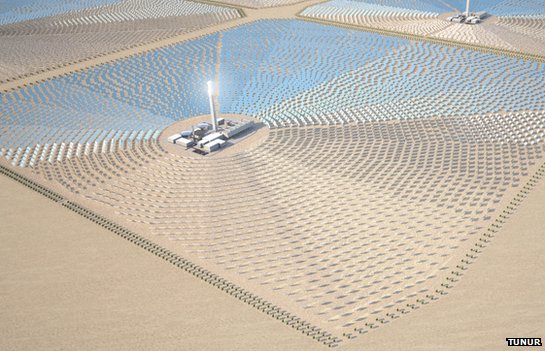 The plan involves focussing the rays of the Sun on a central tower. TuNur says it has already spent 10 million euros developing the site in southern Tunisia.

The company has gathered three years of solar data from the site, which they say has been independently verified.

Legislation has also been passed in the Tunisian parliament to facilitate the export of the energy, and an agreement has been reached with the Italian network operator to connect a dedicated undersea cable to a substation near Rome.

“This is not a back-of-the-envelope fantasy,” Kevin Sara, chief executive of TuNur told BBC News.

“We are working with some of the largest engineering firms in the world. This is a serious project. Yes, it is risky like any big energy project is risky.

“But there is nothing new about moving energy from North Africa to Europe.”

The company argues that existing gas pipelines from Algeria that run through Tunisia have operated without a glitch through the turbulence that has followed on from the Arab Spring.

Their plans involve using concentrated solar power (CSP) technology. This allows the developers to store some of the energy generated so that the supply is “dispatchable”. It can be switched on or off on demand.

The company involved says its electricity supplies will be secure, and 20% cheaper than home-grown sources, such as offshore wind.

Desertec was a German initiative to develop a large-scale solar project in North Africa, enough to provide 15% of Europe’s energy by 2050. Backed by multiple partners, the idea required funding of up to 400bn euros, which proved to be a struggle. In recent days, most of the original shareholders decided to quit.

“We were an associate member for several years and we withdrew about the same times as Siemens and Bosch, as they weren’t really going anywhere,” said TuNur’s Kevin Sara.

“Everyone was pushing them in diff directions; there was management turmoil; they weren’t helping us or our cause.

“We have a singular project, which we are trying to realise. They were an industrial consortium that was trying to develop an idea.”

“We are able to deliver dispatchable, low-carbon electricity to the UK more cheaply than offshore wind and more cheaply than nuclear – all we’re asking for is the chance. Allocate us 2GW and let’s see what we can do with it,” Mr Sara said.

The government, while set to open the bidding process for energy projects outside the EU, is not rushing to embrace the Tunisian idea.

“In order to reduce costs for British consumers, any future non-UK project would need to compete on cost effectiveness with projects in the UK before being allocated a contract for difference,” a Decc spokesperson told BBC News.

“This means that British consumers get the best deal, no matter where the electricity is generated.”

And the government is clear that if the Tunisian project did go ahead, the energy would have to be exclusively for use in the UK.

“We expect that all electricity generated by any non-UK projects will be used in the UK,” the spokesperson said.

The plan involves building an undersea cable to Italy to connect to the European grid. The UK solar industry is also keen to pour some cold water on the African approach.

It argues that many British-based developers have been hurt by government cutbacks of an existing subsidy called the Renewables Obligation.

The added confusion caused by foreign bidders for future contracts is unwelcome, according to Seb Berry from Solarcentury.

“The very last thing we need is the additional medium-term uncertainty that would be created in the early years of the next Parliament from any decision to push on with opening up the CFD scheme and Levy Control Framework budget to foreign projects.”

In 2013, the Irish government signed a memorandum of understanding with the UK to facilitate the export of wind energy.

But in the face of stiff opposition from locals, angry about the prospect of thousands of wind turbines on the flat lands of the Irish midlands, the government in Dublin dropped the plan. 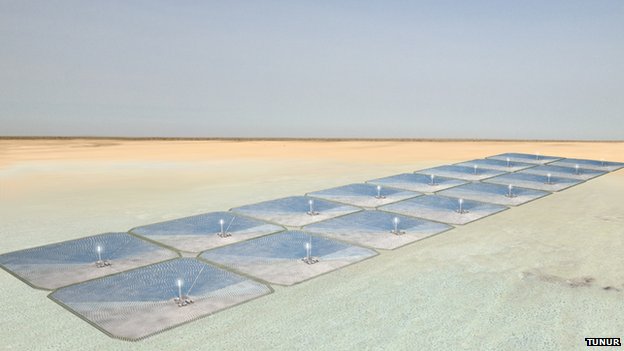 Another project that has been mooted is a connection from Iceland that would see hydro-electric power imported by an undersea cable over 1,000km in length.

However, there is no agreement at present on who might pay for this connection according to Bjorgvin Sigurdsson, from Landsvirkjun, the National Power Company of Iceland.

“We are looking into the feasibility of such a cable, but no decision has been made yet – but it looks as if it could be a viable option for Iceland and the UK,” he told BBC News.

“We expect to spend another two to three years before we can make a final investment decision,” he added. “It could only be operational by 2024.”