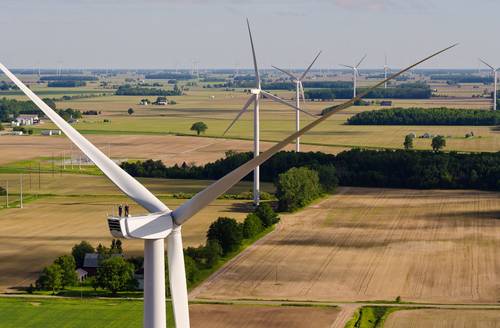 The state has the potential for more than 59,000 megawatts of wind energy generation — more than 1.6 times the state’s current energy needs. That capacity is the 18th best wind resource in the U.S.

Solar energy: Michigan generated just 33 gigawatt hours of photovoltaic solar power in 2012, but it has the potential to generate 74,373 gigawatt hours per year through rooftop solar panel programs and other solar utility efforts. That’s enough power to serve Detroit’s needs for a year, and then some.

Biomass: Michigan could produce 4 million dry tons of sustainable feedstock each year for bioenergy, enough to produce 50 million gallons of ethanol that could power more than 80,000 cars each year.

The shift to renewable energy sources in Michigan — particularly wind — has picked up in the past few years and could get more of a boost as the Obama administration seeks a 30% reduction in carbon dioxide emissions by 2030, advocates and utility companies say.

That could mean more investment and more jobs to add to Michigan’s modest energy sector profile of about 83,000 workers. One recent study concluded targeted local investment in wind and other renewable energy could support nearly 21,000 jobs in the state by next year.

“Wind energy has been the primary source of new renewable energy in Michigan,” John Quackenbush, the chairman of the Michigan Public Service Commission said as he spoke earlier this year to green energy proponents at the Michigan Energy Fair in Mason.

One reason: It’s about half as expensive to produce than utility companies initially expected, down to as little as $50 a megawatt hour last year from more than $100 a megawatt hour in 2009.

DTE Energy and Consumers Energy, the two companies that serve Michigan’s lower peninsula, are building wind turbines in the Thumb area. Consumers built turbines recently in the Ludington area in western Michigan. The Thumb has enough wind to be a top site nationally for harnessing the resource, officials from the companies say. Wind and other renewable sources of power are expected to provide a steadily increasing amount of Michigan’s power needs by 2030.

A state law that requires 10% of electricity produced come from renewable sources by the end of next year has increased demand and helped propel the construction of wind farms. Michigan still gets more than half, 54%, of its power from coal, a significant source of carbon dioxide emissions.

Since the state law passed in 2008, utilities have invested more than $2.2 billion in renewable technology, including building hundreds of wind turbines, some as tall as the Fisher Building. There are now more than 20 wind farms in Michigan that are operational and in development, the public service commission said.

Michigan utilities and energy producers have strategies to reduce carbon dioxide emissions, mostly by adding scrubbers to coal-fired power plants and also by replacing coal-fired plants with ones that run on cleaner-burning natural gas. More renewable energy also has become a big part of the equation. Because of that demand, Michigan’s growing wind business has meant falling prices for residential consumers.

To cover the extra cost of green energy production, residential customers have been paying a utility surcharge. This year, largely because of the lower cost of wind, DTE has reduced its surcharge from $3 per meter a month to 43 cents, and Consumers Energy eliminated its surcharge altogether, down from $2.50.

Wind farms — which sprout towers 400 feet tall — have been praised and derided.

Some Michiganders don’t like the turbines’ humming noise from the whirling blades. They complain that the towers ruin views and kill birds.

As a source of power, wind farms are less reliable and efficient than coal or gas-fired power plants largely because wind comes and goes.

But utility companies say wind farms are a clean source of power and increasingly less expensive to build and operate. Wind, after all, is free, and after a wind farm is built, it takes fewer people to operate than a power plant.

While the blades are dangerous to birds, harm can be mitigated with good operating and management practices and protection plans, conservancy groups say.

In addition, some school districts, such as Laker Schools in the Thumb, have incorporated wind power to save money on electricity and teach kids about science and the environment, said Brion Dickens, who installed three, 80-foot tall turbines through a $265,000 state grant.

Right now, he said, the district’s turbines are not running because of a dispute over who should cover the cost of repairs. But he said the project illustrates wind’s potential. He said he’s working with other schools and districts as they develop renewable energy projects.

Michigan went from a capacity of 2.4 megawatts of wind power in 2007 to 287 megawatts in 2011, enough to power more than 120,000 homes. The state is expected to produce an additional 3,000 megawatts as more projects are developed, according to the NRDC.

Consumers Energy, based in Jackson, built its first wind farm, Lake Winds, on the west side of the state in Mason County in 2012. It has 56 turbines.

As a side benefit of the wind farm, the Ludington & Scottsville Area Chamber of Commerce offered bus tours so curiosity seekers could see the turbines up close. The chamber is no longer giving those tours, but a local operator, it said, has added the stops to its tours.

Consumers Energy is now building a second, $255-million wind farm, Cross Winds, in Tuscola County in the Thumb. It should be completed by the end of the year, said utility spokesman Brian Wheeler. Plans for the Cross Winds call for 62 turbines. The project also is expected to create about 150 construction jobs.

“Wind has high potential,” Wheeler said. “We think it’s a reliable source at an affordable price.”

DTE Energy, which has acquired wind development rights on 80,000 acres, is planning a fifth wind park, also in the Thumb.

The Detroit-based utility commissioned its first wind farm in 2012. The others are Thumb Wind in Huron and Sanilac counties; Gratiot County Wind in the middle of the state; Pheasant Run Wind, which was renamed Brookfield Wind, and Echo Wind, both also in Huron County.

Among renewable energy sources, wind is most abundant and economical, said Irene Dimitry, a DTE vice president. In her office, models of white, wind turbines — including one her son made out of Lego blocks — dot the window ledge.

Most of the wind farms are in the Thumb, she said, because the peninsula tends to be rural, and wind is strongest as it blows over water, then land, and heads back out to water.

Still, she added, there may be a limit to how many turbines a community will allow to be built, and winds tend to be strongest during spring and fall, the opposite seasons in Michigan of when power demand is highest. DTE and other utilities rely on other energy sources to compensate for this.

DTE generates about 70% of its power from coal-fired plants, she said, but is closing old coal plants and seeking to diversify its energy mix as the state and utilities look at the new EPA proposal and reduce emissions.

“We are still trying to process what that rule says,” Dimitry said this summer. “We’ll have to put together a plan.”

DTE and Consumers Energy expect to meet their renewable energy target of 10% by the end of 2015, largely because of wind, and will consider building more wind parks.

This is good news for suppliers like Ventower, which started building giant towers for the wind turbines in 2011 and has been steadily growing.

The state estimates that since 2008, renewable energy investments by Consumers Energy and DTE have helped create more than 200 companies and about 2,500 jobs, mostly in construction.

Just about every day now, he said, trucks loaded with tower sections are leaving the factory to rumble up to the Thumb and other Midwest locations where the tower parts are being assembled and erected.

“From our perspective, wind has supported job growth and manufacturing,” Viciana said. “We’re a clear result of that.”

Contact Frank Witsil: 313-222-5022 or fwitsil@freepress.com. An earlier version of this report was previously published.

Wind energy on the rise

? Lower production costs: Power from wind in Michigan is half as expensive to produce than utility companies initially expected, down to as little as $50 a megawatt hour last year from more than $100 a megawatt hour in 2009, according to the Michigan Public Service Commission.

? Lower utility bills: DTE cut its renewable energy surcharge fee to 43 cents per meter a month from $3 per month. Consumers Energy eliminated its $2.50 a month charge in July.

U.S. power plants used renewable energy sources to generate about 13% of electricity produced in the U.S. last year. Michigan law requires a 10% standard by the end of 2015. The renewable energy percentages for Michigan have been rounded up to whole numbers.