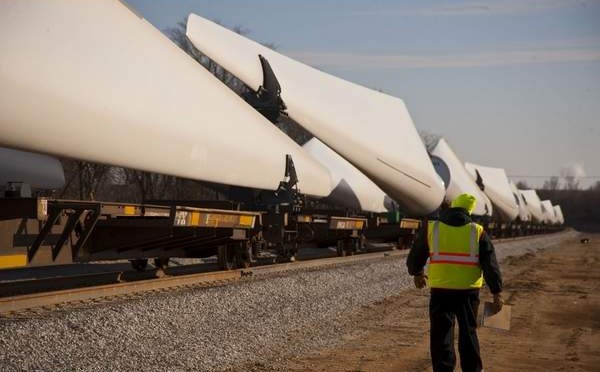 MidAmerican Energy announced Friday it is adding $280 million to its investment in wind energy in Iowa — an expansion that will install 67 more Iowa-made wind turbines in western Iowa and enable the company to provide wind-powered electricity to more than 1 million Iowa homes.

If approved by the Iowa Utilities Board, the company’s proposed wind power project would add up to 162 megawatts of new wind generation capacity in Iowa when it is completed by the end of 2015, said Bill Fehrman, president and CEO of MidAmerican Energy.

The utility plans to develop one new wind farm site in Adams County and expand a second site in O’Brien County in 2015, Fehrman said during a Statehouse news conference he held with Gov. Terry Branstad and Lt. Gov. Kim Reynolds. The expansion will result in 200 construction jobs and 10 permanent jobs in Adams County.

“With this proposed expansion, beginning in 2016, MidAmerican Energy’s wind resources are expected to produce an amount of energy equivalent to approximately 50 percent of the retail energy customers are expected to need,” Fehrman said.

“These wind projects help stabilize rates in the long term for our customers, foster economic development in Iowa communities, and demonstrate MidAmerican Energy’s commitment to the environment,” he added.

Fehrman said his company is working with county officials and landowners to secure development and interconnection rights for the project sites, which are expected to provide more than $40 million in additional property tax revenues over the next 30 years along with annual landowner payments.

Blades for the new turbines will be manufactured at the Siemens facility in Fort Madison, which Fehrman said was the low bidder in a competitive process.

Coupled with projects currently underway in Grundy, Madison, O’Brien and Webster counties, Fehrman said MidAmerican Energy will have about 3,500 megawatts of wind generation capability in Iowa by year-end 2015 — enough capability to provide energy for the equivalent of about 1.05 million average Iowa households.

Once the newest project is completed, MidAmerican will have invested more than $6 billion for wind generation development in Iowa, making wind energy about 40 percent of its electric generator nameplate capacity, he added.

Energy costs passed through to customers are projected to be reduced by about $93 million over 10 years.