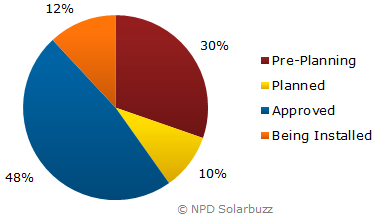 Solar photovoltaic (PV) technology is poised to play a substantial role in fulfilling the need for increased power generation capacity across the Latin America and Caribbean (LAC) region.

According to the latest NPD Solarbuzz Emerging PV Markets Report: Latin America & Caribbean, the total PV project pipeline is growing throughout the region and now exceeds 22 GW of projects across all phases of development. Over the next five years, approximately 9 gigawatts (GW) of projects will be installed: 1 GW of projects are already under construction, and 5 GW of projects have received approval to proceed and could begin construction soon.

“Solar PV is now starting to emerge as a preferred energy technology for Latin American and Caribbean countries,” said Michael Barker, senior analyst at NPD Solarbuzz. “The region has high electricity prices and it also benefits from strong solar irradiation, which makes it a good candidate for solar PV deployment. As a result, experienced global solar PV developers are seeing the strong solar PV growth potential in the region.”

Previously the LAC region was confined to small-scale and off-grid solar PV applications, including rural electrification; however, today solar PV is being targeted to address large-scale utility power project requirements, primarily in Brazil, Chile, and Mexico. Many of these projects are being developed by experienced international firms, including leading U.S.-based companies First Solar, SunPower and SunEdison, and European developers Mainstream, Enel, and Solaria, which increases the likelihood that these projects will ultimately be executed.

“Many countries across the LAC region have the potential to develop into major solar PV markets in the future,” added Barker. “While project pipelines vary by country, there is a strong contribution from early-stage developments that have yet to finalize supply deals or find end-users to purchase the generated electricity, which presents both risks and opportunities for industry players.”